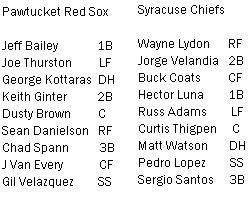 The mighty David Purcey started for Syracuse... he's a really big kid. Purcey pitched six innings, giving up two runs on five hits. He also walked three and struck out five. So it was a pretty eventful six innings. Bubba Nelson and Mike Gosling split the seventh. Each guy gave up two runs. Mikel McDonald kept the spirit alive for the eighth and ninth inning and allowed no further Red Sox to score.

Mike Tejera was the ENEMY. Tejera pitched deep into the sixth inning, allowing one earned run on four hits. He walked one, struck out one, and gave up a home run to Buck Coats, who will be appearing at the Grand Ole Opry through Memorial Day Weekend.

Chris Smith was a reliever once again, pitching 1 1/3 innings and gave up the second run. Abe Alvarez pitched a perfect eighth and Eric Hull kept the Chiefs from scoring in the ninth.

The PawSox had 13 hits! Bailey went 3-4 with a home run, two RBI, and a walk. Chad Spann batted a runner in! He also struck out twice and grounded into two double plays. you stood and you watched as the PawSox left town:
1. Chiefs catcher Robinzon Diaz was on crutches with his ankle all taped up, thanks to his collision with Dusty Brown yesterday. Eric Kratz was called up from double-A Manchester. Eric Kratz is... you know what, it doesn't matter.
2. This could be it for Syracuse being the Blue Jays' AAA franchise. Buffalo's a possibility, since Cleveland's calling it quits with them. There should be plenty of affiliation changes in 2009.
3. Belated note on Chip Cannon: He was the Manchester Fisher Cats' all-time home run leader with 51.
4. Enormous pitcher David Purcey leads the IL in strikeouts with 39.

The Pawtucket Red Sox are finally coming home. We've got Alex Cora and Sean Casey coming up this week, so dig it. We all have a lot of work to do.
Posted by Jenks at 8:39 PM