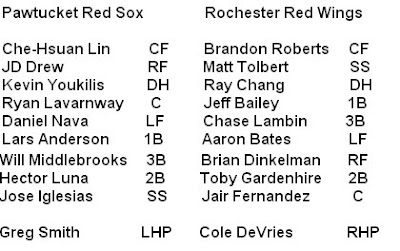 Starting pitcher for Rochester was Cole DeVries. DeVries gave up a lot of hits and got kidney-punched off the hill in the fifth inning when he walked Kevin Youkilis with one out. Overall, DeVries gave up two runs on eight hits. Could have been worse. The Red Sox left people on base all night long, so thanks a lot, rehabbing sluggers.

The other guy from over there, Greg Smith, who can build a castle from a single grain of sand, fared much worse. Smith was battered for six runs through five innings... Oh, darn my socks. I reversed my SP assessment. Am I that rusty?

The Red Wings took a rather early lead indeed, scoring not once, not twice, not thrice, not... foureyes, but fried rice. Smith walked shortstop Matt Tolbert and Tolbert stole second. DH Ray Chang then doubled to right, scoring Tollbooth. Jeff Bailey, who leads his team in walks, walked. It's one of the things he does best, the other being able to make eggs over easy without fracturing the precious, precious yolk.

DeVries got third baseman Chase Lambin to fly out, but then Aaron Bates came around real mean with an RBI single. 2-0 Rochester. And then the worst possible thing happened: Brian Dinkelman hit a three-run homer. Dinkelman!

Greg Smith managed to get his shit together and strike out Toby Gardenhire to end the inning.

Ray Chang came around again in the second inning with another RBI single. EVERYBODY RAY CHANG TONIGHT!

Things were super quiet at the park until, say, the fifth inning. JD Drew singled to center with one out. And then, as I mentioned earlier, DeVries walked Youkilis. Lefty reliever Jake Stevens was given the opportunity to regulate, but instead he pissed all over the seat and gave up back-to-back doubles to Ryan Lavarnway and Daniel Nava, but not Yamaico Navarro. 6-3!

First baseman Hans Gunderson followed the doubles up with an RBI single to right, scoring Nava. 6-4! Stevens got Will Middlebrooks to line out, but for some reason MGR Tom Nieto opted for another lefty, former Atlanta guy Chuck James. Oooh, Chuck, what a sexy name. Are you ready for me... Chuck? CJ faced Hector Luna and I'll bet his knees were knocking. But Luna flied out to end the Red Menace.

Former Pawtucket reliever Jason Rice came in for the sixth and showed the talent and poise that made him so attractive to Oakland. Rice gave up a pair of runs in the sixth when catcher Jair Fernandez homered with Dinkelman on first. 8-4 Rochester!

Hey, Trever Miller's on the PawSox! Where'd they dig him up? Miller made himself useful and pitched the rest of the game for Pawtucket. No one scored, no one came near. And the Red Sox put a bunch of runners on in the ninth, but Gunderson K'd to end everything. Ah, Ziggy. Will you ever win?

Two things:
1. Drew and Youkilis were big draws, but I believe seeing Keith Foulke in Rochester trumped all of that. Even though he made Pawtucket lose.
2. Trot Nixon was there signing autographs before the game. I should have been there. I was gonna go, but... No, I should have been there. Maybe I could have struck out Ray Chang.
3. Daniel Nava hit a triple, so that was kind of cute. He wound up going 3-5.


Sorry I wasn't around for the past few days, but I was in Montevideo attending a sports blogger summit. Oh, sure, this isn't your conventional, well-thought out sports blog, but my worldwide influence intrigued the hosts. There were flaming desserts and eco-hiking and all sorts of exotic boozes. Wish you could have come.

TONIGHT! Pawtucket's back at home, facing the Yankees. Matt Fox v Adam Warren, if you're curious. I can't go because I hate my job which consumes far too much of my free time and the commute's a pain and I hate my job. And I'm broke. Can someone hook me up with more favorable employment? I can't sing and I can't type, but I can...
Posted by Jenks at 7:07 AM