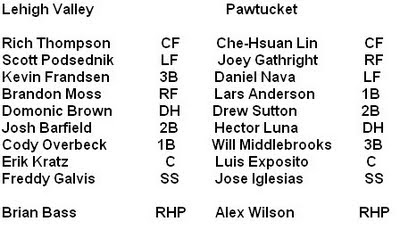 3-1 Lehigh Valley IronPigs. And that is how you win a fucking ballgame. Just a ballsy, fabulous pitching performance by Brian T. Bass, who pitched a complete game and gave up one run. Bass threw 120 pitches to do it, but he did it. I genuinely have to give it up for the IronPigs, who kicked their life off with bad, bad losing but now here they are. Playoffs.

I admit to feeling somewhat hosed as a fan. I'm well aware of how gingerly the Boston org treats its players in the minors. Especially the pitchers. Pitch more than five or six innings? NOOOOO! Throw more than 90 pitches? NOOOO PROGRAM DERAILMENT!!! DEVELOPMENT!!! And I certainly don't expect Mets-Bisons style stuff, like regularly running their starters deep. But obviously the Phillies made an exception for this playoff game. THEY MADE AN EXCEPTION.

And why? Holy cow, look at their attendance. They lead all the minors! All classes! Number one! Can you imagine 2012 if they go all the way? That park is gonna be berserk. So Brian Bass, I hope you get some kind of bonus for your outing. I'll bet he gets some sort of gift from the front office. If not from them, then from me. I'm so impressed.

So what happened? Rich Thompson, very light-hitting outfielder, is a killer leadoff guy because he's smart. Thompson gets on base, steals, all of that. So when he singled in the first... and then stole second (Thompson leads the International League in stolen bases by a long shot with 48. Second place? 35. Yeah.) A couple of groundouts later and bing bang boom, run scores.

Second inning, former Indian/Padre/dude Josh Barfield hit a solo home run. 2-0. Rich Thompson struck again in the sixth, leading the inning off with a double and then scoring on some small-ball shit.

Pawtucket kinda sorta had their best chance in the ninth. Hector Luna led off with a single. Luna advanced to second on Kevin Frandsen's throwing error, then stole third. Will Middlebrooks flied out to center and Luna scored.

And then came Luis Exposito and Jose Iglesias. Exposito, stepping up after Middlebrooks. Bass has thrown how many pitches at this point? And what does Exposito do? He swings at the first pitch. What a jerk. Exposito swung his bat at the subsequent pitch and grounded out. Two down.

Iglesias was the last hope, but he flew out to center. Our hero, Rich Thompson, recording the last out. And then we all cried.

two things:
1. Nava and Anderson batted third and fourth, respectively. Neither got a hit.
2. Oh yeah, Alex Wilson pitched seven innings. 80 pitches. Trever Miller pitched the last two and he did a good job, not that it mattered.
3. "Lars Anderson came to bat in the home half of the first with a runner stationed at third. The first baseman ended up lofting a fly ball to left, a shot that in many instances would have been deep enough to score the run. Given there was two down, Anderson’s out was merely tacked on to the ugly RISP stat Pawtucket mustered in its short and not-so-sweet stay in the International League playoffs." - Cool story, Brendan McGair. McGair covers the Friars, right? So he'll still be around.
3. "I think they have one of the better staffs [in the IL], and the times we've been through here they've had some pretty good arms going out out there with [Kevin] Millwood, [Brandon] Duckworth pitched pretty well against us a couple of times, we had [Felix] Doubronot, and [Kevin] Whalen," said outfielder Rich Thompson. Kevin Whalen? Probably Kyle Weiland. (source)
4. "I told Rod [Nichols, the IronPigs' pitching coach] I won't come out," Bass said with a smile. "He said he'd give me three hitters -- I guess I needed four -- but that's all right. I got through it." - Jeff Schuler, Allentown.
5. "The IronPigs are dead-set on making PigsFly this postseason, something fans of the team since the franchise came to Allentown thought would never happen. Go Pigs!" - Amanda Getz, View From Section 116.
6. Freelance writer John Barone's take.
7. "The days of Mike Rouse, TJ Bohn, Ron Chiavacci and Dave Huppert are now gone and forgotten as Lehigh Valley have completed their sweep of Pawtucket to move onto the International League Championship Series against Columbus (Indians affiliate). The names replacing those above are Galvis, Bass, Moss and Ryne Sandberg, along with 21 others who have brought a brand new brand of baseball to the Lehigh Valley that includes aggressiveness ,attention to detail ,and fundamentals." - Phuture Phillies

And that's it. I will be out and about tonight if you'd like to commiserate.
Posted by Jenks at 7:42 AM

Myself and 3 other IronPig fans made the trip to Pawtucket for this game. Game results aside, great park and great fans. Will gladly make a return visit in the future.

Oh, cool! I really want to go to Allentown next year.

Let me know if you need tickets. Good times! :-)