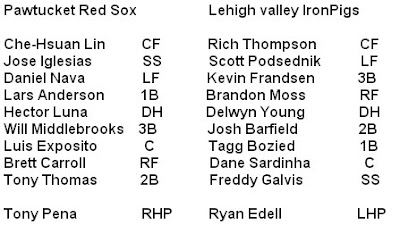 IronPigs win, Pawtucket's fallen so far, the Phillies are champions, the Yankees suck, I like bread and butter. Yesterday I said that if the Red Sox lost, it'd all be over. I was wrong. Okay? I'll never correct anyone's spelling again.

Starting pitcher for Pawtucket was Tony Pena. Pena really went the distance in this playoff game, working hard for the team. ALMOST FIVE INNINGS. Once Pena hit that magic Boston minor league pitch count of 85, it was time to go beddy-bye. Oh, those back-to-back singles with two outs? You got this, right Okajima? Yes, Hideki Okajima came in for that last out in the fifth. What the fuck. Okajima went on to pitch another inning, setting the Pigs down in order.

Pena also allowed a couple of runs, and like such as. Brandon Moss, solo home run in the second. Brandon Moss, RBI double in the third. He's a real US American.

Ryan Edell, once a reliever, started for Lehigh Valley. Edell surpassed Pena's IP by one. Pawtucket only scored one run off Edell, that being an RBI double by Anderson in the first. The Red Sox were down 2-1 for the majority of the game, but in the eighth inning they tied it when Daniel Nava went deep, almost too deep, for a ground rule double. Che-Hsuan Lin scored from third to tie the game.

And so we go to extra innings. Justin De Fratus again, slayer of Pawtucket bats, taking care of those late inning. De Fratus struck out Lin, Sutton, and Iglesias in order in the top of the tenth. Really badass, you have to admit. Randy Williams, who'd entered the game in the ninth, was far less successful. Shortstop Freddy Galvis led off with a single, CF Rich Thompson sac bunted. Minus the 'sac' part, because Williams committed an error that allowed Thompson to stand on first and feel good about himself.

Scott Podsednik, former relevant big leaguer, attempted a sac bunt himself. It worked! Galvis and Thompson moved up a base, Podsednik walked back to the dugout to receive high-fives. Williams, facing exxxtreme power threat Kevin "Meat Mallet" Frandsen, was given orders to execute an intentional walk. To face Brandon Moss? Well, you guys would know. And of course Moss got a hit, scoring Galvis. The crowd, I presume, went nuts. I heard the fans on the radio, they were very excited. Good for them, I say, with no trace of wryness or superiority.

To sum up: Tony Pena was sleepy, Pawtucket left too many runners on, Randy Williams feels like he let the team down, Brandon Moss stabbed me in the back, Hector Luna was hitless again, Lavarnway should come back. In fact, Hector Luna came up twice with runners in scoring position and made the last out. Aw, Luna.

two things:
1. Perfect Allentown paper game story. Just one small typo, not even worth mentioning.
2. I looked it up. Allentown is five hours away by car. But you have to cross the GW Bridge which is usually FUBAR and you have to figure in rest area stops. But I'll bet it's cheap to stay there, right?
3. 'Phuture Phillies' spelled Phillippe Aumont incorrectly. Aumont pitched one inning, gave up a run.
4. "POG: Sox left 9 on base. BUT, I can tell you as someone who sihttp://www.blogger.com/img/blank.gifts behind home plate, there were two runners who reached when they should have been rung up. Two others on bad plays, which Bush and Overbeck will tell you they should have made. Throw in Aumont giving two gift walks, Sox were lucky to just get those runners on." - commenter KGF on The Horn and Bell blog, regarding game one. 'Brandon Moss Hogg', ha.
5. I am not sure what this sports website's about. It's by high school kids? Eddie Pannone did a thing.
6. Danial Nava, Scott Podsednick, Freddy Galvais. I expect better.

I point out other peoples' mistakes to compensate for my own feelings of inadequacy.

Tonight at McCoy! Alex Wilson and his luscious rump will face... I know this... Brian Bass, yes. If the Red Sox lose I am going to drink my face off and write a strongly worded letter to Arnie Beyeler. Or they could win and then lose. HECTOR LUNA, COME BACK TO ME!
Posted by Jenks at 7:08 AM

I already bought tickets to the Gov. Cup Finals so they better start winning.