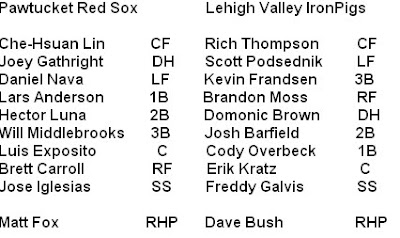 Lehigh Valley WINS! 4-2. Uh-oh, playoff contention can be a real bitch. And it's the IronPigs' first franchise playoff game.

Matt Fox started for Pawtucket, which was a really good idea and is exactly what I would have done. No, for real. Fox was the LOSING pitcher, going six heavenly innings and giving up The Only Three Runs That Mattered. Two of them were solo home runs by catcher Erik Kratz and choir boy Brandon Moss.

Starting P for the IronPigs was Dave Bush, and I wonder if he's the same Bush who was on the Brewers? YES. It also appears to be Bush's third org. this season. Poor kid. Bush worked his way into the seventh inning, getting a couple of outs before being replaced by good ol' Joe Savery. Bush struck out six, gave up a solo home run to Anderson but no other runs.

The IronPigs picked up their first run in the first inning, thanks to CF Rich Thompson. Thompson led off with a single, stole second, advanced on a Podsednik sac bunt, and scored on a ground ball by Kevin Frandsen.

Those pesky solo homers by Kratz and Moss kicked the score up to 3-0 until the Pawtucket home run in the sixth. Brandon Duckworth, ordinarily trusty and ship-solid, was working hard in the seventh but he gave up a solo home run to squirty little shortstop Freddy Galvis. 4-1, guh. And your ERA gets reset for the playoffs, so Duckworth's is 13.50.

The Red Sox got some runners on in the eighth, resulting in a second run. It wasn't that interesting. Reliever Justin De Fratus came in to close the game out, K'd Iglesias and got Lin and Gathright to ground out to end the ballgame. Game length was two hours, 42 minutes.

two things:
1. You missed me hard, didn't you? I had a lot going on. It hurt me more than it hurt you.
2. Justin De Fratus: "I wondered how loud it was going to get when I got the final out and it surpassed my expectations. They were louder than I thought. I didn’t know 5,000 people could get that loud. It was louder tonight than it had ever been all season with a sold-out crowd." (source)
3. Wow, those Allentown kidz are souped about the playoffs. I could go there next yr, right?
4. Gregg from 'Phuture Phillies' talks about it.http://www.blogger.com/img/blank.gif
5. Hector Luna got zero point zero zero hits. LUNA, TAKE US TO THE PLAYOFFS!
6. Reliever Tommy Hottovy got the last four outs and managed to not give up a home run, like everyone else did.
7. PawSox Keith can hardly contain his excitement and frustration: "The PawSox offense struggled early against Lehigh Valley starter Dave Bush (1-0), Bush held Pawtucket scoreless until the sixth when he gave up a lead-off home run to Lars Anderson. Bush worked 6 2/3 innings, giving up one run on five hits in getting the victory." Whoa, temper temper! Good thing I didn't mention the apostrophe in the possessive 'its'.
8. Justin De Fratus tells fans to watch their language.
9. Jay Floyd bends your ear a little with this nice, nice game recap.
10. It was Freddy Galvis' first Triple-A home run. He may win the Paul Owens Award.
11. "Thompson's speed and two groundouts to give him the lead in the bottom of the inning off Matt Fox, who had won his last four starts and was 5-0 with a 1.48 ERA over his last seven outings." I think this sentence is missing a word or two. Aside from that, the story's terrific.
12. PhoulBallz dot com has De Fratus interview excerpts.
13. "Independent of what happens with Rollins, Galvis is not going to be the SS in Philly in 2012. They’ve been patient with him this long and there is no reason to rush a guy who has had one good offensive year and make him an everyday player at 22 on a championship caliber club. They will sign a stop gap type player for a year or two if Rollins isn’t retained. I don’t think there is any debating this." - Anonymous commenter on PhuturePhillies

If the IronPigs win tonight, it's curtains for the Red Sox.