Road trip! I took a quick jaunt up to Manchester, NH today for some AA ball. The Fisher Cats are the Blue Jays, the Defenders are the SF Giants. And, yeah, YOU'D BETTER DEFEND CONNECTICUT! (Connecticut was once voted 'US State You'd Most Like to See Eliminated' by several of my friends and family.)

I saw the Defenders when they were the Norwich Navigators when I was in Portland last year. So I was kind of rooting for them. And they won, 3-0. Their pitcher, lefty Patrick Misch, totally stymied the Fisher Cats. He had 6 strikeouts, but know what? I don't think K's are as meaningful at the AA level, because those kids'll swing at anything. At any rate, he held 'em to two hits through six.

The park was... functional. I don't have a problem with that. I'm not one of those fans that needs schmancy. What I do find stupid is the name: Merchantauto.com Park. Are you kidding me? Do they really think people are calling it that? That instead of saying, "I'm going to a Fisher Cats game tonight", people say, "I'm heading over to Merchantauto.com Park after work" ?

Let's talk about something else.

1. LaBatt's beer at the park! Isn't that nice?
2. I love love LOVE the "I Just Made an Awesome Defensive Play" poker face. How can it be that when an infielder leaps and snares a smoking line drive all Pokey-like, he just tosses it in for a little around the horn without breaking stride? How can they not turn cartwheels or clap their hands or do the Cabbage Patch? Cool as hell.
3. How can there be more than one ceremonial first pitch? I understand that little Jenny and Jeff should both get the honor, but wouldn't that include the ceremonial second pitch? This is really getting out of hand.
4. The Rules and Regs often use the phrase "family friendly" at ballparks. Whose family? Obscene language is cause for ejection most times. Geez, my family always used profanity in front of the kids. Usually we just giggled. I think the people most bothered by swear words are adults.
5. Speaking of which, if two women go to the ballpark and one of them says to the other, "I fucked my husband last night", can she get kicked out?
6. I don't think I saw a single non-white person at the park today. It probably shouldn't bother me, but it does. It's creepy. 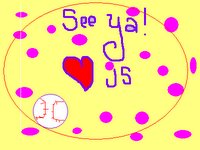 Hi !.
might , probably curious to know how one can reach 2000 per day of income .
There is no initial capital needed You may commense to get income with as small sum of money as 20-100 dollars.

AimTrust is what you need
The company represents an offshore structure with advanced asset management technologies in production and delivery of pipes for oil and gas.

Its head office is in Panama with offices around the world.
Do you want to become a happy investor?
That`s your chance That`s what you really need!

I feel good, I began to take up real money with the help of this company,
and I invite you to do the same. If it gets down to select a proper partner who uses your funds in a right way - that`s AimTrust!.
I make 2G daily, and my first deposit was 1 grand only!
It`s easy to get involved , just click this link http://iqokoboge.freecities.com/baqozugu.html
and go! Let`s take our chance together to get rid of nastiness of the life

Good day !.
might , perhaps curious to know how one can collect a huge starting capital .
There is no need to invest much at first. You may start earning with as small sum of money as 20-100 dollars.

AimTrust is what you haven`t ever dreamt of such a chance to become rich
The firm incorporates an offshore structure with advanced asset management technologies in production and delivery of pipes for oil and gas.

Its head office is in Panama with offices everywhere: In USA, Canada, Cyprus.
Do you want to become really rich in short time?
That`s your chance That`s what you wish in the long run!

I`m happy and lucky, I began to take up real money with the help of this company,
and I invite you to do the same. If it gets down to choose a proper companion utilizes your funds in a right way - that`s the AimTrust!.
I make 2G daily, and what I started with was a funny sum of 500 bucks!
It`s easy to join , just click this link http://tuvijudas.o-f.com/kojyzo.html
and go! Let`s take our chance together to feel the smell of real money

Hi there!
I would like to burn a theme at here. There is such a thing, called HYIP, or High Yield Investment Program. It reminds of ponzy-like structure, but in rare cases one may happen to meet a company that really pays up to 2% daily not on invested money, but from real profits.

For several years , I make money with the help of these programs.
I'm with no money problems now, but there are heights that must be conquered . I make 2G daily, and my first investment was 500 dollars only.
Right now, I managed to catch a guaranteed variant to make a sharp rise . Visit my blog to get additional info.