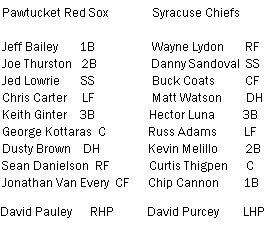 David Pauley pitched seven innings and gave up two runs on four hits. He also walked a pair and struck out four. He left the game with a 3-2 lead. Lincoln Holdzkom came in and it damn near killed me. Talk about the worst possible choice for a tight game! And, yeah, he didn't disappoint. Holdzkom gave up two hits and a walk in 2/3 of the Reighth. The Chiefs managed to tie the game, thus depriving Pauley of the deserved win. Nice job, Sheldon. And you know what? Maybe I should have been a little mad at RJ for putting him out there.

Anyway, Jon Switzer jumped in with two runners on base and bailed out Holdzkom. Pawtucket picked up a pair of runs in the ninth to take the lead. Hunter Jones pitched the ninth for the save and we all went home happy. Or back to our rundown motel, whatever. SYRACUTICA!!!!

I was really excited to see David Purcey pitch. He's terrific! Like a big, strong, left-handed hillbilly. Purcey pitched six 1/3, giving up three runs on five hits (one was Kottaras' home run in the seventh). He struck out five Pawtucket batters. He was not very happy about being lifted, either. Everybody heard... twas the talk of the town.

Chiefs reliever Chris George came tumbling after... then Mike Gosling, who blew it in the ninth.

syracuties?
1. There's a nice hole in the fence out behind the park which enables you to get behind the scoreboard, if that's your fancy. Like if you wanted to collect home run/foul balls.
2. The park's in a weird old industrial area, right next to some generic mall. It's a big park with a big parking lot but I had a hard time finding it. The city planners or whoever could really stand to put some signs up. Not that I care, because I'm in no hurry to return.