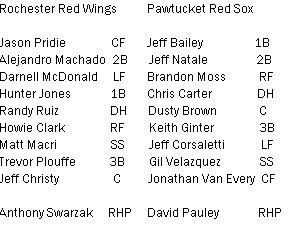 David Pauley seemed to tire quickly. The first inning was 1-2-3, the second he gave up a double to Randy Ruiz but allowed no runs. The third inning he walked Machado and then hit McDonald with a pitch. And how often does Pauley hit anyone?

In the fourth inning, we saw a double and a home run and a walk and many, many pitches. Pauley went on to give up a couple more runs in the fifth and that was it. Ninety-three pitches, 54 for strikes. YOU SUCK PAULEY!!

Vaquedano pitched the sixth inning and did it quickly and cleanly. For once. Michael Tejera followed... I love Tejera but he's got this dirty, dirty moustache... he started pitching rather angrily and gave up a two-run homer to Velvet Jones.

Eric Hull waved the white flag in the ninth inning. It was a disaster. I kind of knew the Red Sox had conceded at that point because they left him out there forever. Hit after hit, like Foreigner. Except it didn't seem 'Urgent' to RJ to yank Hull.

My favorite part of the game was Anthony Swarzak's triple-A debut! Swarzak allowed five base-runners in the first inning and a pair of runs but chilled out and pitched pretty well the rest of the way. Except for the Jeff Natale homer in the fifth. But it was awesome.

The Rochester relief corps did a terrific job and the PawSox could not get guys across home plate. They only allowed one hit and one walk in four innings. And they got five strikeouts! That's Depaula and Korecky, if you care.

And the man who got that one hit was Keith Ginter. Ginter got more hits than anyone!

god stuff:
1. Darnell McDonald left the game a few innings in. Cliburn made a few weird defensive changes.
2. Garrett Jones had homered in every IL park except McCoy. Until yesterday. So congratulations?
3. Randy Ruiz has been absolutely killing us. Maybe it's time for us to start killing HIM. If you know what I mean.
4. GEEZ LOUISE, RANDY RUIZ!
5. Machado's also been a pain, chipping the shit out of the pitchers with singles and stolen bases and crap like that. I ain't too mad.
6. Jason Pridie is IL batter of the week!
7. Okay, what is this? I noticed that whenever Pauley was in the stretch with runners on, he'd glance back at SS Velazquez. And Velazquez would rap on his cup. Like maybe three times, or twice, or whatever. Is that code? I never noticed this before. At first I thought, maybe Gil is just reminding him to pitch from his nuts or something. I have no idea what kind of slang pro jocks use. Someone help me out, or I may have to personally ask Gilbert. And I don't want to do that.
8. Oh, see, Darnell McD left the game after being hit on the hand by Pauley. He may miss the rest of the season. That's awful.
9. I think Pauley signs autographs after every game. No matter what. I always see him signing for the fans. And he's one of the few guys that does that. I wonder why?

Tonight! The magnificent Carmen Cali in a showdown against rookie Mike Bowden. Drinks will flow and blood will spill. And if those boys wanna fight, you'd better let 'em.
Posted by Jenks at 1:04 PM