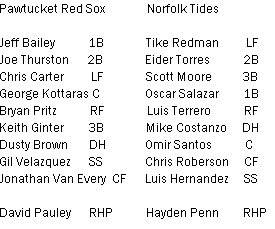 DAVID PAULEY KILL YOU DEVIL CHILD. Seven innings and only one run on five hits. Pauley struck out seven batters. It was pretty cool. He is only a little bit mad that he's not going to the all-star game in Kentucky.

So DP left the game in a tie, not getting the W. Justin Masterson pitched a 1-2-3 eighth inning, how boring. Hunter Jones gave up a hit but otherwise zip in the ninth. Grillmaster Mike Tejera pitched the tenth inning even though he was so hungry he could barely stand it. Mike Tejera is my Favourite.

On the other end of the game, Hayden Penn struck out six batters in 3 1/3 innings. He only gave up the one run, there, when Chris Carter sac'd in Van Every. Big Butt Bucvich jumped in to finish off the fourth inning. Ryan went on to pitch two more innings of scoreless relief. Then came giant, towering righty Kameron Kraig Mickolio. For real, look this guy up. I think he drives to the games in a spaceship or something.

Jim Miller pitched the tenth inning and gave up the game winning home run. Who hit that ball? I am so glad you asked.

Jonathan Van Every heroically hit the home run that gave the Red Sox the 2-1 lead. In a related story, Kottaras went 0-4 with two K's. Joe Thurston had a couple of singles. I could feel it all over!

music is a world within itself:
1. Ron Johnson was ejected from the game in the third. See, JV hit a ball that was ruled a home run. Then that call was overturned and RJ flipped out.
2. Jed Lowrie did not play because he's been called up. FOREVER.
3. Bobby Kielty: released!
4. Yes it's true: David Ortiz'll be at McCoy Thursday. Game is sold out. Will I be there? Come on. You know I hate being surrounded by baseball weirdos!
5. Chris Smith is back, too. He blew a save the other night, the first time Pawtucket's lost after leading in the eighth! Good to know.
Posted by Jenks at 12:18 AM