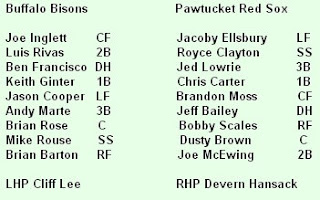 Hansack: Seven innings, four hits, two runs. One walk, 4 SO. Both runs were solo homers. Hansack also managed to hit two batters. Do you believe me? Brian Freaking Corey pitched the eighth and the ever-massive Trav. Hughes pitched the ninth. They held the Bisons scoreless. Oh, you two!

Cliff Lee! Imagine, here at McCoy! Lee pitched five innings and gave up all three runs. He walked three and struck out six. He also made two errors in the same play. Lee wound up throwing 102 pitches, so yes, he is rehabbing. Look at him jive. He was followed by Matt "M" Miller, Juan Lara, and E. Mujica.

Jed Lowrie and Jeff Bailey each doubled. That is all.

it's nice to be nice:
1. My first visit to the barbecue tent! Hot dogs, hamburgers, and grilled chicked were served. I opted for the extra-mayonnaisey pasta salad topped with crushed potato chips with a plain hamburger roll on the side. It was pretty fat and disgusting.
2. Cliff Lee walked right past me on the way outta the bullpen. He tossed his ball up and the girl next to me caught it. "Hey, one hand, alright!" he said. What a wanker! Kidding.. CL also sez "I don't want to be the 'big league guy' that comes down and is bitter all the time and nobody likes. I don't want to be that guy." Oh, I think I know that guy. I think that guy might be Junior Spivey.
3. Sam Horn was also at the BBQ. I took a few photos from a distance. He was probably the largest person in the park. He was definitely making new friends.
4. Luis Rivas!
5. You should see the free ugly sunglasses they were handing out.
6. Indians' fans refer to their team as "The Tribe". Buffalonians call the Bisons "The Herd".
7. Once again, Cliff Lee's middle name is "Phifer".