Pawtucket and Buffalo go at it 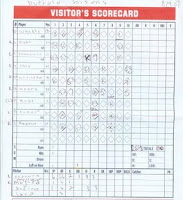 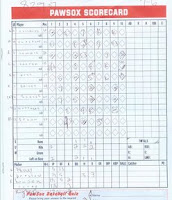 Breslow came in after Pauley, got one out, and that was all he had in him, I guess. He got all tense and sweaty and gave up three runs. They had to call Hansen. He did great, getting the next couple of outs and then pitching the seventh. Brian Corey followed and he was like BAM! WHACK! K-K-K in the 8th. Travis Hughes was also like a monster.

So Pawtucket was behind 6-3 in the ninth and I was ready to call it a night but then reliever Mike Koplove blew the save. Bailey singles, Scales singles, and then the normally hopeless Kottaras homered to tie the game. This was just after I asked someone how to say "You Suck" in Greek.

Hughes gets three quick outs top 10th, then Pawtucket. Lowrie doubled, Chris Carter sac'ed him over to third, then Moss singled him in to win the game. Very exciting.

two things:
1. I have taken many, many photographs which I will one day develop and post. Perhaps in the off-season. A photo a day as I cry into my tap water.
2. Chad Spann, do not mess with my antipathy. Some rotten mallratty kid chucked a foul ball onto the field, perhaps aiming at Spann (not a bad idea, really). Spann turned around to see where the ball came from and then got Baseball Player Tough Guy Face (see also: Kason Gabbard). The 5-0 led the poor kid out of McCoy. It was rather funny and I wish I'd taken his picture.
3. Trent Durrington totally blew by the fans on his cell phone after the game. I'd say, you know, what a tool, but in a way I don't blame him. Sometimes you're just ready to go. But... we had signs and everything. Semi-tragic.
4. Pauley signed a few for the kids after the game, further cementing his nice guy rep. All the other PawSoxians slipped out the back, Jack.
5. I felt a little bad for the Bisons, who are reaching for that IL wild card.
6. Tried to keep up with the Boston game by peering into the press box with binoculars. Tough, tough loss.
7. Ryan Mulhern was named team MVP for Buffalo.

I will be at the park tomorrow... but in the barbecue tent!
Posted by Jenks at 12:01 AM

the thunder blew off his biggest fans. well next year we'll have some new signs for him. they be wishing him a happy girthday!
F U TRENT! we loved for 5 minutes!

Mom, is that you?

no its not mom!
it is me i gave him the nick name THE THUNDER FROM DOWN UNDER!
what did hye do?
next time we'll get some fosters oil cans drink them and procced to throw them at him!


I don't mean this in a bad way, of course! Ethical concerns aside... I just hope that as the price of memory falls, the possibility of downloading our memories onto a digital medium becomes a true reality. It's one of the things I really wish I could experience in my lifetime.

Virtual Memory sure is becoming cheaper these days. I'm curious as to when we will finally reach the ratio of 1 cent to 1 GB.

I'm still waiting for the day when I will finally be able to afford a 20 TB harddrive, haha. But for now I guess I will be happy with having a 32 GB Micro SD Card in my R4i.