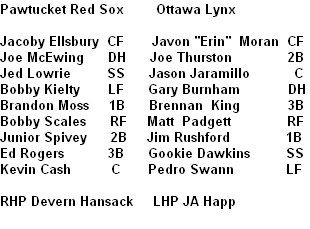 Fifth win in a row for Pawtucket! 5-3

Devern Hansack pitched 6 2/3 innings and gave up all three runs on seven hits. He walked three and struck three out. Hansack then retreated to the clubhouse where he sliced garlic with a razor blade.

Hansack was followed by, oh, everyone. Here: Breslow, 2/3; Corey, 1/3; Lopez, 2/3; and Hughes, 2/3. What, was Martinez getting a pedicure? Nice job not allowing further runs, Craig and Brian and Javier and Travis. (Now, as a lady, which first name sounds most like someone you'd wanna shag? Javier, right? No one good is named Travis.)

Bobby "The Brain" Scales hit a three-run homer off Happy in the sixth. Joe McEwing had a cute little solo shot in the ninth. McEwing also got picked off earlier in the game, along with Spivey. Damn, Happ's a good pick-off guy!

two things:
1. McEwing has been the DH a little bit lately. He must have some kind of soreness/stiffness/achiness thing. Not enough to DL, but enough to warrant a little R&R.
2. Pawtucket is back at .500! And this is their last visit to Ottawa. Forever. Unless baseball returns to Ottawa in IL form in the year 2525. Could it? No, it could not.
3. Pawtucket just won AGAIN as I was typing this. In extra innings. What's next, a talking banana?

I do my best work here during the day. It's night time. No cheesy photos again.
Posted by Jenks at 9:37 PM