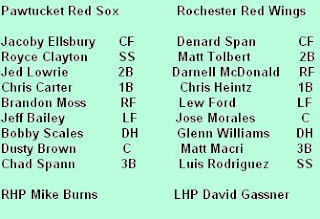 And Pawtucket COMES FROM BEHIND TO WIN 9-8. Another magical evening at Frontier Field!

Surf rat Mike Burns pitched 5 1/3, giving up six runs on nine hits. Only four were earned, thanks to new kid Royce Clayton. Royce Clayton is Francis Buxton's seldom-seen cousin. Abe Alvarez pitched a scoreless 1 1/3 in relief whilst walking two. Brian Corey then blew the save in the eighth, as Pawtucket had totally caught up to Rochester after M. Burns hit the showers. Fear not. Pawtucket scored again and the Mighty Travis Hughes pitched the ninth, got two K's and a groundout for the save, then picked up the pitching rubber and ate it.

Dave Gassner pitched a respectable 5 2/3, gave up two runs on five hits, walked one and struck out three. Bo-RING! All his relievers gave up runs, most notably Jerome Williams with four. Jason Miller then gave up two more, then former PawSox great Brad Baker ruined everything when he gave up the game winning run in the ninth by allowing Washington Nationals flotsam Chris Carter to hit a solo home run.

And they were merry...

Darnell McDonald hit a solo home run off Mike Burns in the first. He had three RBI in all and might be the best looking man on the Red Wings. Matt Tolbert went 3-5. Not a lot of XBH for Rochester, aside from DM. I can't believe Pawtucket didn't lose after being down 6-2.

and I love you much too late:
1. CHAD SPANN?! I just SAW him in New Hampshire and he shows up with Pawtucket like everything's everything? I liked him better from a distance! Why is my life so hard?
2. Former PawSox hitting streak record holders: Dave Stapleton and Dave "Ice" Berg. Berg! What happened to him?
3. Rochester and Buffalo are currently duking it out for the IL wild card. I'm glad Pawtucket won but I would like to see the Red Wings win it. For Lew Ford!
4. Rochester manager Stan Cliburn was PISSED that the R. Wings lost - mostly at the relievers: "The bullpen comes in and doesn’t want to throw strikes. I can’t stomach that. If you’re scared, get a dog." Wow, he WANTS that wild card! But seriously, throw strikes to Pawtucket! God knows they can't hit!
5. You never see Ron Johnson getting all mad, although he did once mention the "Stinko de Mayo" incident, in which relievers Manny Delcarmen and Craig Hansen blew an 8 run lead to Buffalo. Johnson said he "sat both of them down", which in managerial terms means he screamed his head red and repeatedly bitch-slapped them.
6. Rochester catcher Jose Morales leads the International League in batting and superstar pitcher Kevin Slowey leads the IL in ERA. Slowey's getting the call soon, so check that out.
7. Dennis Eckersley will be at Frontier Field today, signing copies of his new book, "That's Kid's Throwing Lightening Out There: A Hall-of-Famer's Guide to Judies, Dribblers, Charlies, and Electric Stuff".
8. Perpetual Red-Winger Garrett Jones got called up.

And that is all. Tomorrow night I'm going to see the CT Defenders play the NH Fisher Cats. I never wanted to be this familiar with the Blue Jays' double-A team.
Posted by Jenks at 8:57 AM

Remember that video by Flotsam & Jetsam that had dark stuff in it so you had to turn up your brightness to see it?

Reportedly from WAS by way of ARI. Or "Tucson". So you're right.

I don't remember that video! Genius.