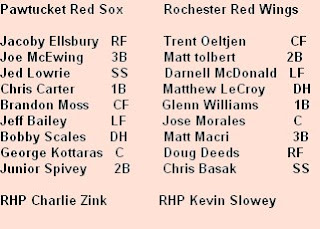 SuperKev only pitched five. He gave up a run and struck out six. They're saving him up, you know! Jay Sawatski and Bobby Korecky finished off the game... J-Saw gave up the other two Pawtucket runs.

Jed Lowrie (favorite celebrity: Pierce Brosnan) doubled. Bobby Scales tripled, two RBI (not a sentence). Ellsbury stole a base. Junior Spivey made an error. Former slugger Jeff Bailey did nothing and he's down to .238. If not for Kottaras, he'd be the worst!

quickly, there isn't much time:
1. Red Wings manager Stan "Van" Cliburn was ejected by the third base ump. Que pasa? Well, Cliburn says the umpire made a gesture to one of the Red Wings' coaches. He flipped off the coach? Does that happen a lot?
2. McDonald and Ellsbury are TIED in the IL for stolen bases. I wonder if they stare each other down. Did you know that Darnell came from the Nationals system? I didn't.
3. Rochester's playing Buffalo next... they're behind the Bisons a half game for the wild card. Cliburn says he knew this series was going to be meaningful back in the winter of '06. I have to root for the Red Wings here.

I'm off to Norwich for the Defenders game. I couldn't tell you who's playoff bound except for the dominant Trenton Thunder (Yankees). Funky boss, get off my back.

I haven't been to nearly as many minor league games in my life as I should have, but those Cliburns seem to figure prominently into each one. That's an exaggeration. But still, I recognized them from the pic before I read their name in the post.