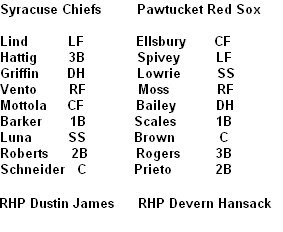 Hansack had 11 strikeouts in seven innings. He only gave up the one run on three hits and walked three. Nice job, lobsterman! Breslow and Hughes very politely did not allow any more scoring.

Dustin James only gave up one run in five innings, that being Jed Lowrie's solo home run. Matt "Beefa" Roney pitched the next two innings and had a pair of K's. Still tied for Jordan DeJong, who betrayed his brother Dustin and allowed the winning run.

Pawtucket scoring: Lowrie's homer, Ellsbury scampers home in the eighth after a Mike Vento RF fielding error. I didn't see it so I cannot elucidate.

I wish I had attended this game. But it's okay. My sister flew home from Iowa and surprised me.

history at the door, who could ask for more?
1. Tension! Syracuse hitting coach (?) Al Le Boeuf and almost-made-it player John-Ford Griffin were both ejected. I can't for the life of me find out why. How does a hitting coach get ejected? And remember when Ron Jackson went nuts that one time and got ejected? That was awesome.
2. Bobby Kielty did indeed get called up to Boston. I'm sorry I doubted you, Ginger.

That's all. This was Sunday's game. Last night they lost. I may write about it.