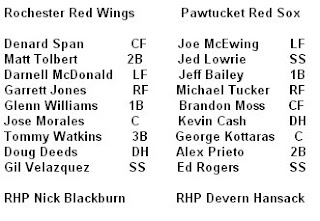 Hansack (five innings) gave up one run on four hits. He walked four and struck out four. Then Travis Hughes took over and everything went black. I think Jose Morales was the batter... G. Jones was on base. Morales hits the ball a long way but foul and the umps do the Home Run Finger Spin. Ed Rogers gets feisty! Meow! Jed Lowrie also argues... in fact, half the team was up in there. First baseman Jeff Bailey says, "I saw it from here!" Call is rightfully reversed. But like it mattered because Rochester scored five runs anyway. Hughes was all over the place. Another call was argued (misplaced home plate tag by GK) but nothing happened, no ejections in spite of prolonged bitching.

New guy Lincoln Holdzkom shakily finished the sixth and then pitched the seventh.

Jeff Bailey and Ed Rogers both homered. Lowrie's doing well, he went 2-4 in this matchup. He's handy with the glove as well.

Seven innings and done!
1. Matt LeCroy has gray hair. LeCroy! Damn! I still love that guy. He got all fired up when the umps reversed the HR call.
2. I never really gave much thought to D. McDonald until this evening. He looks like a male model or something. Except better, because male models look kind of dumb and McDonald is a sexy man.
3. I spied Charlie Zink in the dugout. Welcome back to Pawtucket, Cubic.
4. Bobby Scales went to see his wife graduate. She got her PhD, I think. So he didn't play.
Posted by Jenks at 12:59 AM