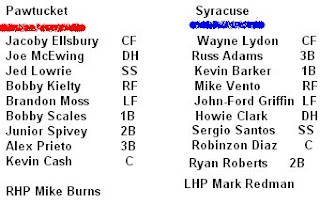 Mike Burns pitched the whole game, the first PawSox pitcher in '07 to do so. Of all people! That was really nice of him since the entire staff must have been wiped out after losing two double-headers in one series. So Mike Burns... some (but not all) is forgiven. And thank you.

Mark Redman started for Syracuse. He only pitched four and 2/3 innings, possibly because he gave up ten runs. Justin Q. James pitched the next three and gave up the eleventh run. Way to go, Justin. Way to extinguish all hope for Chiefs fans tonight.

Big ol' Ryan Houston pitched the remainder of the game and did not allow further runs. Houston was all smug afterward and Redman was not too downtrodden to glare menacingly at him for at least ten seconds.

Bobby Kielty homered and McEwing smacked two doubles. Ellsbury, Cash and Lowrie also doubled. All the XBH stars of this game then formed a secret club.

Russ Adams and Kevin Barker went back-to-back in the first inning which must have made all the PawSox fans in attendance a little nervous.

Sky Chefs:
1. Syracuse manager Doug Davis was ejected by the first base umpire for arguing a close call at the bag.
2. Crisp game considering eleven or so runs were scored. 2:18. Snappy!
3. Abe Alvarez and Jeff Bailey have switched places. Bailey's now a bored Rastafarian lefty starter and Alvarez is a good-natured first-base lummox. Only kidding. Alvarez is off the DL and Bailey is on it.