when i get feeling better, when i'm feeling no pain 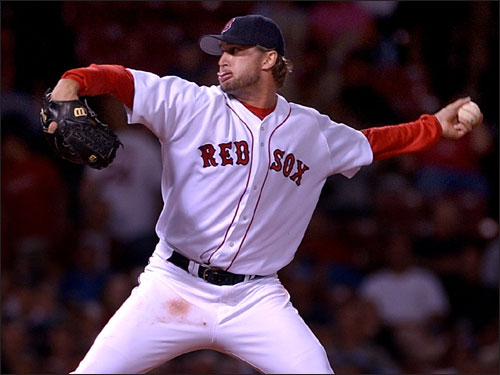 Speaking of Sauerbeck, we all remember how awful he was back in '03, even after the Head Shaving Solidarity.

He claims that Boston pretty much forced him to pitch through an injury and he is SO MAD ABOUT THAT.

"Sauerbeck said he still harbors ill will against the Red Sox, for allowing him to pitch while battling the shoulder problems that eventually required surgery.

"I was treated like a piece of meat," Sauerbeck said. "My health was secondary to beating the Yankees and winning the World Series. You’d like to believe in the goodness of people. There, it was win at all costs, even if it costs some lefty his career.

"The Red Sox traded for me to pitch in the playoffs, and the medicine that was given to me was to get me back on the field for the playoffs," Sauerbeck also said. "Here’s what I think about those people — what goes around comes around. They’ll get theirs.”

A lot of people think SS is a DUI asshole and whiney, ineffective lefty. But Boston can be pretty cold and hardcore.

Henceforth and heretoafter, this will be what is known as the Sauerbeck Curse. Scott also used to pee with the door open in the bullpen.

My friend Kara used to call him Sour Balls. Fitting. I know what you mean about the Sox FO, though.