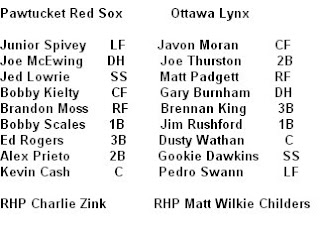 I am mystified by the popularity of Rihanna. She is everywhere! I never saw such a fuss made over a mediocre singer with lame-ass pop songs. Oh, wait, sorry. That happens quite a bit. Is it because she is leggy?

Charlie Zink (6.16 ERA, awesome!) pitched 7 2/3 innings, giving up three runs on six hits. He walked one and K'd three. He also hit three of the Lynx with his wacky knuckleball. Brian Corey came in with the lead but gave up the tying run. Corey got the first two outs in the bottom of the ninth but ran into a little trouble... enter Craig T. Nelson. Breslow gave up a walk-off single. FIN.

Matt Childers pitched 6 1/3 and gave up three runs on ten hits. Ten hits? Three runs? Come on, PawSox. Come on. Eude Brito and Joe Bisenius were effective in relief, much like Aleve. No further Pawtucket runs and two strikeouts apiece.

SuperJoe was 3-5 and got caught stealing. Random infielder Alex Prieto had a nice double for himself. Kevin Cash was 0-4 with a K. And he got picked off. And he's also fat. He can stand under my umbrella.

For Ottawa, Gookie Dawkins was 2-4 with an RBI. No one else's performance really sticks out. Cheap win, guys.

two things, motherfucker:
1. Junior Spivey batting leadoff! Very nice!
2. Jeff Bailey took some BP and will probably return to the lineup soon.
3. I heard Javier Lopez on the radio yesterday talking about the Pawtucket bullpen love. He mentioned that when the relief corps comes in with runners on base, they take it personally and wanna do good for the other pitchers. Grrrr bullpen. Pawtucket's got a pretty good one. YEAH BRIAN COREY!!!
4. Matt Childers was recently suspended fifty games for violating the drug policy. They never say what kind of drugs. I don't even know what they test for. So it could be anything from marijuana to horse tranquilizers to Dexatrim.
5. This game was attended by 1,386 diehard Lynx fans.
6. Both Zink and Childers threw 102 pitches.
7. It looks like Bobby Kielty will be sticking around awhile. He seems to be under the impression that he has a shot of making Boston.
8. Seperately and unrelatedly, Garrett Jones was called up by the Twins.