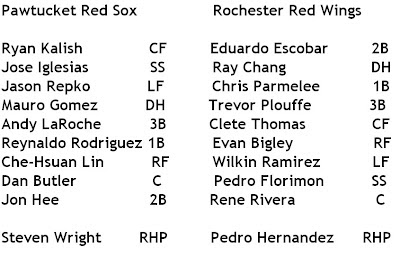 Pawtucket is socked in the jaw, 5-3. Daniel Bard, you had one job. ONE JOB. Not that he cares about the Pawtucket Red Sox defeating the Rochester Red Wings, so I guess it doesn't matter as long as Bard got his work and development in. So thanks for failing to close the game out, Bard. Looks like you'll be back in Boston before you know it!

Starter for the Pawtuckets was new kid Steven Wright. Wright pitched five innings and gave up two runs on five hits. With that line, Wright is going to fit right in with Pawtucket's rich history of adequate five inning starters!

Pedro Hernandez started for Rochester. Hernandez pitched six innings and gave up seven hits, but Pawtucket could only get two runs over. It is mostly Jon Hee's fault, as he came up twice in the classic two out, RISP scenario and... Actually, no, I'm not going there. It's not Hee's fault at all.

The Red Wings were the first team to score. It started in the first inning with an RBI double by first baseman Chris Parmelee, who later ran home himself on a single by Clete "Former Mud Hen" Thomas. 2-0 after one.

The Red Sox picked up a run in the top of the second by way of an RBI single by left fielder Che-Hsuan Lin. They then tied the game in the third inning when four singles evolved into a run, HT Mauro Gomez.

The game stayed tied through Wright's start, through Josh Fields' relief, up until the eighth inning. Bard was all, single, walk, single, HBP, single. Rochester was all, 'Thankx for the three runzz, playah!' And I need to learn how to operate a buzzsaw... Like, a flying buzzsaw that I can launch from some apparatus on a utility belt. Boomerang style! Like, I can flick it from the stands at McCoy Stadium and it will swerve over to Bard on the mound one night, chop off his head very cleanly, and then return to me. Of course, I'd have to rappel down the side of the ballpark to escape...

Anthony Slama came in for the ninth inning, and he continues to struggle. PRAISE JESUS. Slama got two outs, as it is written in the scriptures. But then Lin singled and catcher Dan Butler doubled, scoring Lin. Slama was removed by manager Gene Glynn and replaced by Daniel Turpen, who says crap like "I hate you TNT, if your not gonna let me watch the entire blazer game the don't put it on your network, I'm missing the entire first half."

Turpen got the final out.

love may grow for all we know:
1. Three hits for Lin! Good work, son! No hits for Ryan Kalish, who could probably use some consolation.

2. Trevor Plouffe maybe considers Rochester his home away from home: “Absolutely; I was here for parts of four seasons. Wherever I am, especially when I’m here, I feel part of the team.” Aw. No one who was on the PawSox ever says stuff like that.

5. I want Andrew Bailey so bad. I want him for the playoffs, not for sex, like your mom does.

TONIGHT! Pawtucket goes to Buffalo for wings and unemployment. Zach Stewart will start v Jenrry Mejia. Fernando Cabrera will be there, possibly dozing. Goodbye and wish me luck! I am captain of a contending trivia team, and we're headed for the tournament!