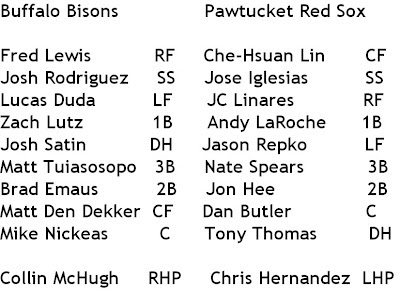 2-0 Bisons, win goes to Collin McHugh. Save goes to Fernando Cabrera. Loss goes to all the PawSox, not Chris Hernandez like the man said. And on a school night, too.

Hernandez gave up two runs on four hits during his six inning performance. Shortstop Josh Rodriguez hit a solo home run in the seventh inning, which was the money run, and Josh Satin was batted home in the second inning by way of a groundout. Josh Satin appears to have a personal vendetta against the Red Sox. He just wrecks Pawtucket.

McHugh pitched seven innings and Pawtucket scrounged up five hits against him, but without, say, Mauro Gomez and Pedro Ciriaco, things were difficult. I am aware that Andy LaRoche hits a little, but not this time. Actually, Jonathan Hee doubled. What the eff is gong on with little Jon Hee? You seriously need to look at his numbers over the last ten games. 11 for 30 with a .367 average, .462 OBP and .995 OPS. Roids, probably.

Josh Fields and Chris Carpenter finished off the game for Pawtucket. Buffalo relievers Robert Carson and Elvin Ramirez combo'd up in the middle to pave the way for Cabrera's sweet sweetness.

boston's not my home:
1. "It was fun. I was fortunate to get through seven [innings] and keep them at bay," said McHugh, who scattered five hits, struck out four and walked none. "Being here was the same feeling [as last year]. You get those chills on the back of your neck when you step up there on that hill. Once you get going, you kind of calm down and let it roll." - Mike Harrington

2. Harrington goes on to talk about Fernando Cabrera and his time with Boston. Cabrera essentially says stuff like, "I like baseball." He's so lucky he's cute. Also, this: "The Bisons headed right back to Pawtucket’s McCoy Stadium, an hour away, to shower and change after Saturday’s game as neither team had the use of Fenway clubhouses." Why couldn't they take a shower at the clubhouse? Seems like kind of a dick move.

"Bisons broadcaster Pat Malacaro was all smiles.. After climbing up the baseball ladder with tasks such as reading out of town scores on the postgame show and calling games at Dwyer Stadium for the Batavia Muckdogs, Malacaro was in awe of his surroundings as he got to participate in the Bisons broadcast from the radio perch at Fenway. “If I never call another inning of play-by-play in my life, I can always say I called game action from Fenway Park. Absolutely incredible,” Malacaro posted on social networking."

- from Andrew Kulyk on Artvoice

4. Mike Harrington en fuego! Even more stuff from him, including post-game audio. Check it out!

TONIGHT! Fernando Cabrera? Wrong on both counts, it's a day game. Billy Buckner will hopefully be crushed by Jeurys Familia, but only if the offense comes alive after he exits because we're trying to win a wild card, here.