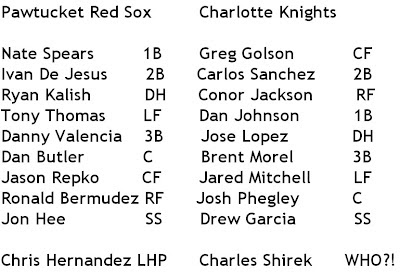 Way to gun down base stealers, Phegley. But Red Sox win 5-4 with some ninth inning excitement and a triple by Nate Spears and many other hits that were not triples.

Starting P for Pawtucket was Chris Hernandez, everyone's new favorite starting pitcher for Pawtucket that strikes people out and gets ground ball outs and doesn't borrow soap and never give it back. And he's more famous than J-Lo probably. H'dez pitched six innings and gave up two runs on four hits. He also struck out six of the Knights, so that's pretty satisfying.

The Other Guy was Herman Munster or Edna Babish. No, it was Charles Shirek, and I'm a dope for not knowing who he is. That might be because if internet search results are any indication, no one really cares about this kid from North Dakota. Shirek also pitched six innings and gave up two runs, so essentially the same start as Hernandez with a couple of minor variations that made it less good.

Okay, so, nobody scored until the fourth inning, which is about when you're 2-3 beers deep and have that warm feeling of general well-being and comfort and joy and the scoring of the game's first run is pure delight. And then you start talking about how you and all your friends should take a train down to Atlanta for their OctoberFest. Nate Spears led off with a triple, I guess finally beating the dearly departed Lars Anderson in that category. A sac fly by Ryan Kalish brought Spears home and resulted in 1-0 Pawtucket. YOU NEED TO BE DOING A LOT MORE THAN THAT, KALISH.

The new kid, Ivan De Jesus, hit a single with one out in the top of the sixth. IDJ played second base, so in that respect he is similar to the original Ivan. Ivan Ochoa, remember him? De Jesus moved to second on a bunt by the Sacrifice King of Pawtucket, then scored on a single by Tony Thomas, who is built like a brick shithouse. UN-DER-PANTS! UN-DER-PANTS!

Bottom of the sixth, though, the Charlotte Knights tied it. Two singles, a wild pitch, and two sac flies mixed up to produce two runs. Like flour and water and baking soda make biscuits. The Knights then pulled ahead in the seventh, taking Daniel Bard for a ride with a couple of singles and a sac bunt. Oh no, 3-2!

Ninth inning, Jose De La Torre trying to close it out. De La got one out, but then gave up back-to-back doubles to Jared Mitchell and Josh Phegley. Potholes in his lawn. De La Torre went on to strike out Drew Garcia, but was then replaced by Josh Fields, who may be almost as vain as Jeremy Kehrt or Barry Zito. He keeps a mirror in his mitt, is what I am saying. Tommy Manzella (?) came in to pinch-run for Mitchell, which turned out to be a disaster because when Greg Golson singled and Manzella ran home, Dan Butler was sitting there waiting for him, having received the ball from Tony Thomas in left. D'oh! PawSox win!

but madame!
1. Catcher Dan Butler got zero hits and struck out three times. Charlotte catcher Josh Phegley went 2-3 with an RBI and has no spleen. Now we see who the real winner is. It's Butler, because at least he still has a spleen.

2. This was Dog Day at the park, so dogs that are fans of minor league baseball can at last enjoy a game. Wait, what? No, it was really just a shit parade of annoying dog owners.

3. So I guess Josh Fields is the closer now.

Well, no one else saw fit to write about this game, so I have nothing more for you. Except that everyone's so shocked that Matsuzaka pitched well and that Pedro Ciriaco is talented. People sometimes have their heads so far up their fucking asses. Y U NOT ON TOP TEN PROSPECT LIST?!

TONIGHT! Pawtucket goes down to Georgia, looking for a game to steal (Sorry.) Nelson Figueroa will face Yohan Flande, like the cover of H2O.