8.6.12 Pawtucket Red Sox v nobody knows we go to sleep 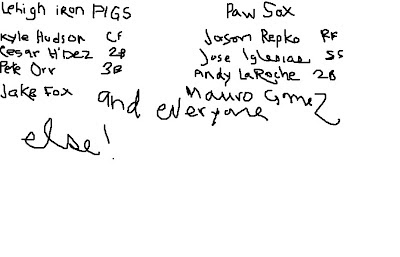 Yeah, but have you ever listened to a Pixies album... On POT?! PotSox win, and Jose Iglesias does some cool stuff and Zach Stewart is so fine... I wanna live on an abstract plain. Or Calistan Way. Hey, hey.

Or an island hidden in the sound. Come and see...

Starter for Pawtucket was Zach Stewart, former child reality star and sex tape victim. Stewart pitched five innings and didn't give up any home runs. He'd probably be pretty good at Eschaton. Stewart walked catcher Sebastian Valle, which is unacceptable. BEND OVER, ZACH STEWART, AND TAKE WHAT IS COMING TO YOU. Sorry, I just can't stop thinking about that Olympic rower's little bathing suit and now I'm mentally superimposing Pawtucket players on his body. I have to stop and think that perhaps there's some quality stuff under the uniforms. Who cares if they're horrible ignorant holy rollers, I WANNA LOOK. I don't know what's wrong with me. Okay, yes I do. I absolutely do.

Scott Elarton started for the IronPigs and man is he tall. Elarton pitched four innings and got shelled. I heard he cried in the shower, I don't know, I wasn't there. Maybe Andres Blanco whispered it to me. He tells me a lot of things that are secret.

I just now realized that Pete Orr and Jason Pridie are both on the IronPigs. I can't take it. That is too much IL-ness for one team. Both those guys should be dead by now. And Jeff Bailey doesn't have a job? Screw you, baseball.

Let's talk about Pawtucket offense, because that is the real truth. First inning, Jose Iglesias doubles with one out. Jose Iglesias is like 22 and has five kids. BOOM! Roasted. A single by Mauro Gomez put Iglesias on third. Mauro Gomez' picture of himself on Twitter is all you need to know about Mauro Gomez. Hint: Bedazzled t-shirt that cost prob. 100 dollahs. Boom, roasted! A double by JC Linares brought home the first Pawtucket run, and then Alex Hassan reached on an error. Alex Hassan went to Duke, so he's probably really good at getting girls drunk enough to hang out with him. BOOM. 3-0.

Pawtucket picked up a deuce in the second inning. Che-Hsuan Lin got on base after Elarton hit him with a pitch. Lin then stole second, which isn't the first time he's stolen something. Eh... I don't know anything about Che-Hsuan Lin except he drinks like a sorority girl. Boom? Lin made it third when catcher-no-one-cares-about Dan Butler singled. That's great Dan, but Lavarnway went to Yale. Ever heard of it? Lin later scored on a force out and Jason Repko scored, too, somehow. Are we 100 percent certain that Repko isn't really Josh Kroeger? Yes, because Repko isn't some nasty freak with an attitude problem, doggin' it on a day-to-day. YEAH THAT'S RIGHT KROEGER TAKE IT UP WITH HELEN WAITE.

Third inning, Che-Hsuan Lin hit a line drive RBI single. And JC Linares hit an RBI single in the bottom of the fourth. The IronPigs little run came in the ninth inning off Jose De La Torre, who was wearing a shirt that said "I Love Daisies".

two things:
1. Jason Repko has a hairy back. BOOM.

2. Andy LaRoche is allegedly Heidi Watney's boyfriend. Watney could probably have any man she wanted and she picks this guy. I don't understand anything so in celebration of this I am having a microwave pool party.

3. JC Linares has the weirdest little body I have ever seen. I love him.

4. Clayton Mortensen... Is secretly kind of an okay guy. I just found out just now that he's normalish, like Will Inman.

5. Daniel Bard. Oh my god, where do I start? Jesus don't want him for a sunbeam.

6. Didn't Jose De La Torre get in trouble for sexual assault? Am I thinking of the wrong guy? I feel like he was arrested at some point.

7. Lars Anderson ain't a Red Sox any more. Enjoy a place where there used to be industry, sir. Oh, wait...

8. Mike Rivera looks like a shriveled Carlos Maldonado. That's just a fact, not an insult.

I gotta get ready and go, for tonight is poster night. I'm feeling unpredictable, so watch out, Royce Ring!
Posted by Jenks at 2:04 PM