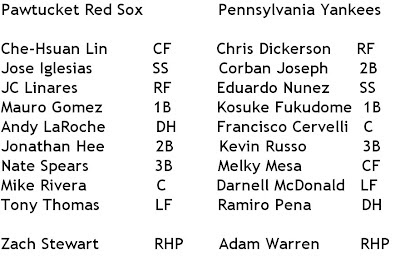 Warren pitched five innings. Pawtucket got ten hits off him, but only translated that into two runs. Come on, guys. Come on. Che-Hsuan Lin came up three times with two outs and runners in scoring position, but wasn't clutch.

The Scrankees scored first, Joseph's solo home run putting the team on the board in the first. But Pawtucket tied it in the top of the third! Jose Iglesias walked, JC Linares doubled, Andy LaRoche got IBB'd to load the bases. Andy LaRoche. Intentional walk. Third inning. DOES NOT COMPUTE! ERROR!

However, Jon Hee surprised everyone, possibly even himself, when he hit an RBI single. Tie game, yes! But not for long, because Joseph hit an RBI double in the bottom half of the third.

Top o' the fourth: Three consecutive singles (MR, TT, CL) led the inning off for Pawtucket. Iglesias could not deliver, instead grounding into a force, Mike Rivera out at home. JC Linares singled, though, scoring Tony Thomas (Left fielder? WHAT.) But then Gomez grounded into a double play to end the inning. Boo, you whore.

SWB came back roaring in the bottom of the fourth, picking up three runs and effectively burying Pawtucket. All McDonald's fault. I know you thought he was your friend, but he is nobody's friend.

Nothing much happened in the fifth inning, or the sixth, except for reliever Preston Claiborne running in for Warren. Jose De La Torre pitched the seventh for Pawtucket, gave up a solo home run. And then, eighth inning... Cory Wade was pitching for Scranton and Pawtucket hit a couple of singles but nothing doing. Bottom of the eighth, De La Torre gave up a single to Francisco Cervelli... And then Melky Mesa hit a home run to left. Well, it looks like Arnie Beyeler and Rich Sauveur were ejected right after that, so I'm guessing there was some dispute over the home run. De La Torre was ejected as well, a little bit later, by home plate ump Jeff Gosney.

In the top of the ninth, JC Linares hit a two run homer and Hee hit a solo home run. Kooky.

Oh, so here's the deal, thanks to Kevin McNamara:

"Already trailing, 6-2, in the eighth inning, the PawSox’ Jose De La Torre gave up a long fly ball by Melky Mesa down the left-field line that was ruled a foul ball by home plate umpire Jeff Gosney. After discussing the call briefly with the other two umpires — neither of whom had a clear view — Gosney reversed his call and ruled it a two-run home run. That gave the Yanks an 8-2 lead and sent manager Arnie Beyeler into a tizzy. He was ejected by Gosney. Pitching coach Rich Sauveur then came on the field and continued arguing, even slightly bumping Gosney. He was also ejected.When De La Torre retired the side, he also made a beeline to the plate and needed to be restrained while getting in Gosney’s face. De La Torre was also ejected.

two things:
1. Pedro Beato's in Pawtucket now. Mark Prior was released, which I have to imagine he asked for. I'd say there were probably other roster moves they could have made.

2. Linares and Hee both had three hits. Nate Spears got no hits.

TONIGHT! No, this afternoon. PawSox in Boston, Chris Hernandez pitching. Buffalo opposes with Collin McHugh. Hope the rain clears up for you guys!