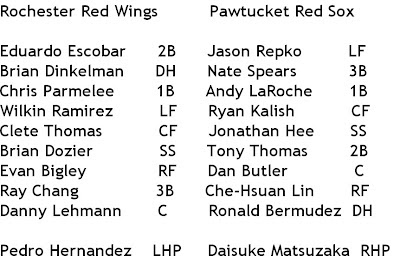 Red Sox win, 3-0, behind a performance by Daisuke Matsuzaka that made for a great night at the ballpark. Matsuzaka gets the win, everybody whistles in the shower.

DM pitched seven scoreless, one-hit innings with seven strikeouts. He entered the eighth inning, much to the crowd's delight, but after throwing eight straight balls it was time to go home. Best start all summer for Pawtucket? For me, yes it was. I just had so much fun and it was a total PBE. The fans got into it, Matsuzaka flipped his ball up to a kid in the stands upon his exit as most of the crowd got on their feet to applaud. He just seemed so relaxed and like he was having a good time. YAY BASEBALL! Sometimes it can still make me happy.

The Rochester Red Wings offered up Pedro Hernandez. Hernandez pitched 2 1/3 innings before somehow hurting himself. I'm pretty sure I saw a trainer out there. At least, some dude in khakis and a polo shirt as opposed to a regular uniform. Hernandez had given up a solo home run to Nate Spears in the first inning. Hernandez was replaced by Deolis Guerra, who is terrifyingly enormous. Guerra was doing fine until the fifth inning, when Ronald Bermudez hit a triple and then scored on an error. Just like last night, except that was Spears. Lin scored on that triple, bringing things up to 3-0.

Josh Fields came into the game to "close the door", as Nate Spears stated post-game. Fields was like, straight atomic heat, striking out four batters in two innings. Oh, your hair is beautiful... Tonight.

two things:
1. Attendance last night was 9,412, which is really good for McCoy. There was a wave going! It was a large crowd for a random Tuesday night.

2. Tony Thomas hit a double. Tony Thomas is just crazy jacked, you should see it. He is huge. I would pay to see him in his underpants, just as an appreciation of the human form. Nothing weird.

3. Rochester second baseman Eduardo Escobar was the only Wing to get a hit. Nice job again, Daisuke Matsuzaka.

4. Wow! Terrific stuff from Marc Normandin on Matsuzaka: "It's unknown if Boston wants to see him in September to see if he is worth retaining on the cheap as pitching depth, but, if he's healthy for the first time in years thanks to Tommy John surgery, it might be worth exploring. Your first inclination might be to say no, but again, if we're talking about what Dice-K might do against the disappointment Aaron Cook has already levied against us, at a time in the season where Boston's goal is to discover things that could help the 2013 club, then there's no real harm in finding out -- it's not going to take innings away from any potential 2013 starters sitting at Pawtucket." - Over the Monster. I love this because sometimes I think people are so clouded with Daisuke Disgust that they don't think objectively. I mean, what if he was just some guy on the PawSox? Mike A. Casanova?

5. Who was the dude in the Pawtucket press box with the Buffalo Bill look? No, seriously.

I guess that's it. I thought there would be more buzz about this game, but I suppose You Had To Be There.

Off day for Pawtucket. Nate Spears is going to relax and maybe go see a movie. Tomorrow the team heads to Charlotte, which is secretly in South Carolina. I can't wait.