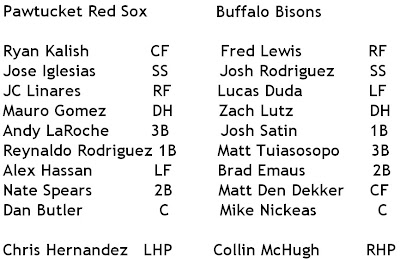 PawSox win, 5-1, in the feel-good game of the summer. I know I feel good about it, especially since Sunday's game was such a shitfest. I love you, Chris Hernandez. Enjoy this win.

Hernandez pitched six innings and gave up on run on three hits. He was up to 99 pitches, otherwise who knows what may have happened? CH struck out seven batters, so that was thrilling.

Collin McHugh started for Syra... Rochest... Buffalo... I swear, if you play for the PawSox you could probably claim partial residency in New York. Not that you would want to. (BOOM! Roasted.) McHugh had a decent start, 5 2/3 innings and only giving up one run. Although... McHugh did throw 100 pitches so that was kinda bad. But he got six strikeouts, so that was good. No decision for McHugh because it was all Pedro Beato's fault. I'll talk about that in a minute.

First inning, Jose Iglesias walked with one out and then JC Linares singled. Why is Billy Buckner such an asshole? And Josh Fields? I thought Jeremy Kehrt was bad. Oh well, enough about them. Mauro Gomez hit an RBI single and Gomez is a gift sent from heaven. Who else on the team hits like he does? No one. They're all bums. I miss Pedro Ciriaco very much.

Buffalo tied the game at the bottom of the first, when Hernandez gave up a couple of singles and that bastard Josh Satin hit a sac fly.

And then the innings rolled by like fluffy clouds across the summer sky... Except it was night time, but whatever. I've been to that ballpark. So has Jonathan Van Every. Chris Carpenter pitched, CJ Nitkowski, Jose De La Torre, all those guys.

Eighth inning, JC Linares led off with a single and then Gomez homered. Suck it, Mets. No, actually, don't suck it. The Mets have enough problems without me wishing ill upon them. And then Andy LaRoche homered! Reynaldo Rodriguez and Alex Hassan hit back-to-back singles and booted Pedro Beato out of the game. Justin Hampson entered and Nate Spears sac bunted. Alright, Hamilton! Hampson then maybe ate some mushrooms before the game, because he intentionally walked Dan Butler? Who? What?!

Ryan Kalish, who didn't have a hit the entire game and is slumping, grounded into a force that scored Rodriguez. 5-1, there it is.

Fernando Cabrera pitched the ninth for Buffalo. UNF. Soon I will post all my photos of Cabrera, stolen or otherwise. And... I'll just leave it at that.

two things:
1. Pawtucket went 1-11 with RISP, so they could have inflicted a lot more damage. If you're into damage, you freak.

2. "McHugh is an avid tweeter and even keeps a blog called "A day older, a day wiser" where he's written about the learning curves of going to a new level. He had a 7.07 ERA in his first three starts with the Bisons but has made the adjustment well." - The great Mike Harrington

3. Mets Are Better Than Sex has a thing on Collin McHugh.

5. "McHugh’s command has declined from Binghamton to Buffalo in 2012 allowing 2.05 BB/9 in Binghamton and 3.67 BB/9 in Buffalo. His command led to difficult innings for McHugh but he only allowed the three hits and struck out six and was able to contain any further damage." - Mets Merized Online

TONIGHT! No word on who's pitching, but possibly Tony Pena for Pawtucket. They're playing the Scrankees at McCoy, but it's an away game. Because of the thing.

None of the whores I know ever told me about Johnny Pesky. I am so sad over it. A lot of things about baseball frustrate me, bore me, annoy me, piss me off. Most of the players appear to be dull, shallow, meatheads who lean on their 'faith' to condemn homosexuality or whatever when really they're just homophobes without an ounce of intelligence. ( I said most.) But I really am sad over Johnny Pesky... Ah, what a life...