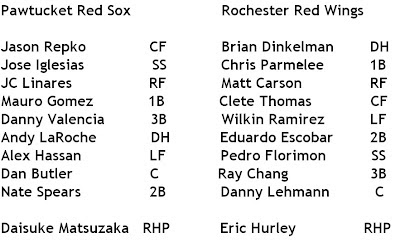 Pawtucket wins, 9-3. Rochester starter Eric Hurley could probably use a warm bath and a good cry, since he got pounded and took the loss. If you saw his picture you would feel bad, too.

Starter for Pawtucket was Japanese superstar Daisuke Matsuzaka, or 'Akumu', as he is known in Venezuela. Matsuzaka pitched 4 2/3 innings, giving up two runs on five hits. First baseman Chris Parmelee got him for a two-run homer, so that was probably exciting for him. I enjoy this old picture of Parmelee...

Meanwhile, on the flip, Eric Hurley only made it through two innings, although he tried for a third. Jason Repko got a knock in right away, homering at the top of the first inning. Rochester put up two in the bottom half of the first, but the Red Sox bit back with three doubles in the second inning. 3-2!

So here's the top of the third: Danny Valencia and Andy LaRoche hit back-to-back singles and Alex Hassan walked to load the bases. Catcher Dan Butler hit a line drive single to center, scoring Danny n' Andy. Good work, catcher Dan Butler. Good night, E. Hurley. David Bromberg stepped in and struck out Nate Spears swinging. I could have told you how many pitches it took, but the minor league website makes me want to throw up with its flaws. I suppose all you need to know is that Jason Repko was the next dude and he doubled. Two more runs in for the PawSox!

Bromberg went on to pitch three innings and managed to hold back the tigers. But then Luke French... Ugh, bad relief pitching is such a downer... French entered the sixth inning probably focused on getting outs. But he started the outing by giving up a single to shortstop Jose Iglesias and a double to JC Linares. French struck out Gomez, which is no mean feat, but ran into his old teammate Danny V, who smacked a two-run double. Wow, 9-2!

Rochester picked up their third run in the seventh inning off Nelson Figueroa, who very nicely pitched the whole second half of the ball game and got the win for himself. Thanks, buddy. On April 11th, 2009, I said nice things about you. Just know that.

shorty so seductive dancin on me:
1. Pawtucket racked up 14 hits last night! Three for Iglesias, three for Valencia, with his blood still warm on the ground. Gomez and Hassan came up empty handed, though. Gomez, you're good. Hassan, go run some laps, maggot.

3. Oh my god, sometimes I love Steve Hyder so much. "As I was sitting outside the hotel this morning, I chuckled as a taxi pulled up and picked up Daisuke Matsuzaka and his entourage. What a waste of money this guy has been." I feel like Hyder should have been on the field for Poster Night. They should have a Poster Night for the staff!

4. Anthony Slama also pitched for Rochester. Slama's a faith n' family guy but... "The most awkward eye contact is with yourself while getting a haircut." This cannot be argued.

TONIGHT! Steven Wright makes his PawSox debut, so that should be interesting. Pedro Hernandez opposes. Is Andrew Bailey still around? We're keeping him, and that's not a threat, that's just a fact. I have rope and weaponry. Just sayin'.
Posted by Jenks at 10:43 AM