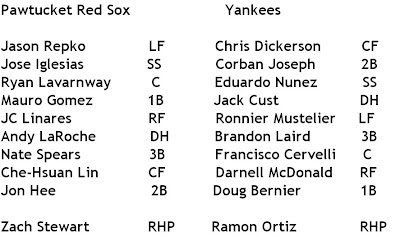 Jason Repko WINS! 4-2. Pawtucket's Zach Stewart gets to hang the W on his fridge, Ramon Ortiz can wear his 'L' on his sweater like Laverne. And the PawSox are in first place again!

Stewart pitched five innings and gave up a solo home run to Darnell McDonald. He also piled up eight strikeouts.

Ramon Ortiz pitched six innings and gave up all four runs on six hits. His K's were but two.

The Red Sox scored the first run of the game when Mauro Gomez hit an RBI single in the first inning. They added the whipped topping of a pair of runs in the second inning, when second baseman Jon Hee singled with two outs and Jason Repko hit a home run to left. 3-0.

The Yankees seem to have ganked some of the sons of Pawtucket and I don't appreciate it. Former Pawtucketeer Darnell McDonald got his hair cut like Samson but was still able to muscle a homer in the fifth to make it 3-1.

Bottom of the sixth, Andy LaRoche hit an RBI double. 4-1. Bottom of the eighth, Daniel bard comes in after Garrett Mock, gets an out, but allows a double to shortstop Eduardo Nunez. Unfortunately, two passed balls later ("Passed balls my ASS!" - Lavarnway), Nunez came home.

The Yankees put a couple of runners on in the ninth, but Chris Carpenter hung tight and got the last out. Thanks, Elvis.

don't say you're easy on me:
1. You're about as easy as a nuclear war.

2. Jose Iglesias and Mauro Gomez got two hits apiece. JC Linares and Lavarnway got zero hits. I would love to see a bare-knuckle brawl between Lavarnway and Daniel Bard, like the one in 'My Bodyguard'.

3. Garrett Mock pitched two scoreless innings and is against gay marriage. The Yankees presented Justin Thomas and Preston Claiborne. Wasn't Justin Thomas going to be on the PawSox?

4. Sad story about the passing of a longtime PawSox fan.

5. Ryan Kalish has left us once again for those miserable fucks in Boston.

6. You know what? Screw you guys. No one tells me anything! I had to find out from this guy! Anderson and Podsednik are GONE! And Craig Breslow is back? Crazy.

7. In a related story, this IronPigs series is a very big deal to IronPigs fans, because they care deeply. More deeply than most Pawtucket fans. I'm going back to Allentown as soon as possible. Read this great story on Bacon and Biscuits for more information.