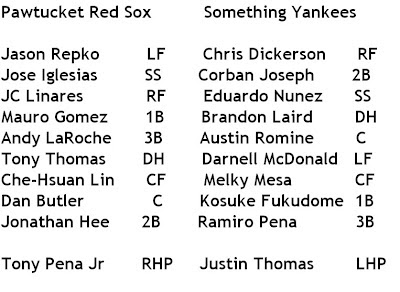 Scranton W/B wins 5-4. They should just name all their minor league teams 'The Yankees' and be done with it. Except for triple-A, because in Scranton Wilkes-Barre people don't like the Yankees. Make them the Trolley Frogs.

Starter for Pawtucket was Tony Pena Jr, who pitched 3 2/3 innings and gave up a solo home run to CF Melky Mesa.

Justin Thomas started for the Yankees and evidently he was with Pawtucket a little last year. Like, as a reliever? No, in fact it was earlier this season, with Chorye Spoone and such. Thomas pitched five innings and gave up four runs on seven hits, so it looks like the Red Sox were winning!

Sixth inning, Alex Wilson pitching in relief. Brandon Laird, who has allegedly hit 30 doubles this season yet is not listed on the IL leader thing, doubled. Laird then scored when catcher Austin Romine singled.

And now, here is Daniel Bard's inning, the seventh. Bard led off by walking Chris Dickerson, then made a throwing error with 2B Corban Joseph at bat. So two on, no outs. But don't worry, because Dickerson was caught stealing! And then Eduardo Nunez popped out, so two outs and just Joseph hanging out on second base.

Bard then hit the next natter, Laird, with a pitch. Kevin Russo came in to pinch run, which makes nearly no sense to me but what do I know. Bard followed that up by walking Romine to load the bases. Jose Iglesias made an error, scoring Joseph, then Mesa hit a two-run single. 5-4.

Ryota Igarashi closed the thing out for the Yankees. Mauro Gomez made the last out, with a runner on base. Stupid Gomez. 0-5? Get at it!

two things:
1. The Noise Nation blog breaks down the playoff race in a way everyone can enjoy!

4. Tamar Chalker also provides a game story from the flip side.

I gotta split, but Zach Stewart is going to face Adam Warren. Figuratively. More Yankees tonight, why not go see? It's all ending soon. And then what'll I do?