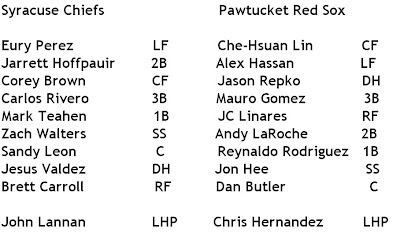 Pawtucket pitching blows it over and over, loses 10-2. Sorry, Chris Hernandez it just wasn't your night. The night was John Lannan's. He pitched like a dream, struck some people out, threw 105 pitches, His only misstep involved Mauro Gomez, and lord knows how hard it is to get one by Gomez. Also, Mauro Gomez doesn't return my phone calls even though I have made it clear that I am in love with him. WHAT ARE YOU AFRAID OF, MAURO?!

Chris Hernandez only lasted two innings, but the loss is all his. Just hits and runs all over the place, all kinds of sex and violence and bloodshed. Hernandez started the third inning, but was removed by Arnie Beyeler after he loaded the bases. Mark Prior took over but Jarrett Hoffpauir hit a grand slam and the game was already in its second hour and I was feelin' festive, so it's kind of a blur.

Andrew Bailey pitched the sixth inning and looked great, tight, strong. Can we keep him in Pawtucket for a while? I'd love to have him in the bullpen. I'll bet your mom would, too. Ooooohhhhh!!

I don't feel like I need to hash out all the Chiefs' offense, but I will add that their defense was sharp last night. Good crowd all around at the park, plus Jim Martin doing PA? And Poster Night? And 2/3 of the KBJ Train? Yeah, it was a good night in spite of the loss. Nothing but love!

the error should not have been charged to reynaldo rodriguez:
1. Sorry. I love Hee, but his throw was weird.

2. Jason Repko went 2-4 and I wonder if his teammates are annoyed with his hustle. Some people are small and petty that way. I happen to love his balls-out professionalism. Maybe he ingests mushrooms and he thinks he's on the Twins.

3. Prior, Will Inman, Bailey, Alex Wilson, and Chris Carpenter all pitched for Pawtucket.

TONIGHT! It's Jeff Mandel v Billy Buckner. And I am about to say Very Bad Things about Buckner.