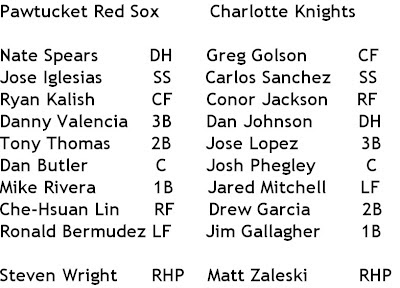 Charlotte White Sox win, of course, 2-1. Loss goes to Steven Wright, who did nothing more than give up two runs through four innings. Only one was earned. Shit happens.

Wright's pecadillo came in the first inning. Center fielder Greg Golson led off with a single. Wright struck out the next two batters, but then hit DH Dan Johnson with a pitch. I don't know, Johnson probably had it coming. A passed ball moved both runners up, and then this Jose Lopez character hit a two-run single. And that was all the scoring for the Knights. Four Pawtucket bullpen guys (Pedro Beato, Rich Hill, Daniel Bard and Jose De La Torre) smushed the Charlotte batters down. Beato struck out all three guys he faced and Hill got a pair of strikeouts.

Starter for Charlotte was Matt Zaleski, who we've absolutely seen before. Zaleski pitched six and gave up the Red Sox run. Stellar relief was provided by Leyson Septimo, Daniel Moskas, and Jhan Marinez. Moskas I remember, those other two guys... Well, I am looking forward to getting to know them and eventually declaring my love for them. And then we'll live on a boat, we three, and hunt sharks. Like the movie "La Tintorera".

In case you wanted to know how Pawtucket scored their one run, it was back-to-back doubles by Tony Thomas and Dan Butler. You guys, Tony Thomas is fucking huge.

And with this win, the Knights are going to the playoffs! Do you think anyone cares down there?

two things:
1. "Jubilant Knights players whooped and hollered inside the locker room and quaffed iced-down beer and champagne as Charlotte advanced to the playoffs for the first time since 2006." - Jack Horan. See, whenever I think I may feel bad for a baseball player, I remind myself that I have never doused myself in champagne at work.

2. "Leyson Septimo, on a rehab assignment for the parent White Sox, Daniel Moskos and Jhan Martinez each worked a scoreless inning in relief protecting a narrow one-run advantage through the crucial innings. Martinez went 1-2-3 in the ninth for his fourth save." - Ted Fleming

3. Steven Wright, who I totally forgot was a knuckleballer, hit Dan Johnson twice. And Bard hit Conor Jackson. Many owees for Charlotte.

4. Ryan Kalish got no hits and struck out twice. Kalish is certainly struggling lately, perhaps due to his atrocious dubstep at-bat song. It sounds like someone firing up their dial-up internet.

5. Thursday's Pawtucket/Charlotte game was also a 2-1 loss. So that's the Knights, the Indians, and the Yankees going to the playoffs with Lehigh Valley and Pawtucket tied for the wild card. OH YEAH HERE WE GO.

TONIGHT! Billy Butthole will face Charlotte's Scott Carroll. I can't go, mostly because it's in South Carolina and I am here in Central Falls. After that, who knows?