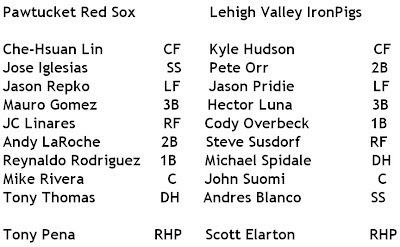 Win goes to the IronPigs, but it was a close one, 3-2. Reliever Joe Savery gets the win in relief. Loss goes to Alex Wilson, who couldn't hang onto it in the tenth.

Starter for Lehigh Valley was Scott Elarton, who was once on the cover of Pork Illustrated. Elarton pitched 5 1/3 innings and gave up two runs on six hits, with only one being earned.

Pawtucket's starter was Tony Pena Jr, who I swear is in contention for the 2012 Least Interesting PawSox Player Award (Past winners include Aaron Bates, Michael Bowden, and Brent Dlugach.) Pena didn't pitch five innings. He gave up two runs on six hits.

Lehigh Valley's first run came by way of a homer by third baseman Hector Luna. Then there was another one. Pawtucket tied it up in the sixth inning. Mauro Gomez hit an RBI single and then Linares hit a sac fly. It really wasn't that interesting, but it did knock Elarton out of the game in favor of Tyson Brummett.

IronPigs relievers Jake Diekman, Phillippe Aumont, and Savery held Pawtucket scoreless the rest of the night. Red Sox relievers included Jose De La Torre, Mark Prior, Will Inman, and Alex Wilson. Wilson gave up a walk-off solo home run to Andres Blanco in the bottom of the tenth. Ouch. Wilson was later spotted walking the mean streets of Allentown in the rain, making no attempt to avoid getting wet. That's pain.

the thing that I call living is just being satisfied:
1. Welcome to the PawSox, Reynaldo Rodriguez! Some folks call you ReyRod, but I won't be doing that. Try harder to get a hit next time.

3. Well, look who's all better now! Tony Thomas and Will Inman! Crazy how Tony Thomas was cleared to play right after Pawtucket lost some people, huh?

4. "“I didn’t want to strike out because if I get a strikeout, it’s gonna be my fourth in one day, and that’s not good for a guy who is supposed to be a contact hitter,” said Blanco, his face still showing the remnants of the shaving cream pie he received from a teammate during a postgame TV interview." - Thanks for that, Blanco. (Jeff Schuler)

5. "IronPigs manager Ryne Sandberg knows how crucial this two-game home and four-game away series with the PawSox is, but emphasized that out of the remaining 31 games, 27 are against divisional opponents. “Playing inside the division the whole month besides a short series against Toledo (Aug. 18-21) is always a chance to do something,” he said. “I wouldn’t want it any other way.” - YEAH SANDBERG! (Michael LoRe)

TONIGHT! Chris Hernandez v Tyler Cloyd. Still IronPigs. This is a good series, you guys, so soak it up.
Posted by Jenks at 5:54 AM