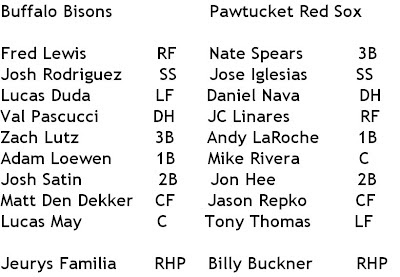 4-1 Red Sox. Big crowd at this game, which was over three hours long. HUH WHY. I'll give you a hint: Buffalo starter Jeurys Familia pitched five innings and it took him 90-something pitches. He walked five batters. Billy Buckner threw 101 pitches through six innings, walking three. So blame all the pitching finery, frippery, and fanciness.

Buckner gave up one run, which was a solo homer by third baseman Zach Lutz. K. That was the fourth inning. Buckner got the win and maybe last week I would have wished a painful death upon him, but I am officially Over It and I gotta get back to hating Kris Johnson and so forth.

Familia took the loss for Buffalo and gave up three of Pawtucket's four runs. It all began in the third inning... Tony Thomas, who played left field again, singled to lead things off. And then Nate Spears walked. Oh, Nate. Nate, Nate, Nate. Sorry, I just realized that Spears has been around a while and I know absolutely nothing about him. Maybe he's a poet? RACK CITY, BITCH!

And then Jose Iglesias did something awesome: He bunted. Ever since poster night, I have maternal feelings toward Iglesias. Which is weird and I am sorry I told you, but there you go. I think he is neat. Familia made a throwing error and Thomas scored and Iglesias made it second and SOMETHING'S HAPPENING. Familia then walked Daniel Nava. Forgot to tell you that Nava's in Pawtucket, rehabbing. JC Linares grounded into a double play, scoring Spears to make it 2-0, but then Andy L. struck out to end it all.

In the fifth inning, Familia walked in a run. I just realized that I might be the only person who reads the game recaps so intently on the minor league site.

Bottom of the eighth, Garrett Olson pitching for the Bisons. Jonathan Hee hit an RBI single. Some of these guys are pretty good. Anyway, that's the fourth run so thus ends my offensive summary.

Pedro Beato made his pitching debut for Pawtucket, Will Inman also pitched. Will Inman is from like Texas or something, you should hear his crazy accent. Buffalo's bullpen provided us with Jeff Stevens and Justin Hampson, before Olson came out and was overmatched by Jonathan Freaking Hee.

hurts so good:
1. Jose Iglesias went 3-3. Ronald Bermudez jumped in after Nava, but didn't really contribute anything. What's even worse is that he ate the last banana. Nate Spears walked three times. I'd hit it.

2."[Familia] did not pitch particularly poorly, but he pitched worse than his box score looks (and that’s factoring in the 5 BBs). He threw a ton of balls and worked his pitch count up real early real fast, hence only going 5 IP. The offense didn’t do him any favors, committing two errors and scattering only 5 hits. The Bisons’ solitary run came in the 4th, on a Zach Lutz home run. Former Bison/Met and newly acquired Red Sox Pedro Beato got the save for his new club, sticking it to his former." - Which is what I said earlier. Amazin' Avenue also spelled 'Pawtucket' wrong.

3. "Hey everybody! My name is Nate Spears and I play infield in the Chicago Cubs organization." - Oh. Hi.

4. Sorry, Bermudez stole a base.

Here's the thing: Buffalo will no longer be the home of the Mets, evidently because the park wants a team that doesn't suck so much. I had no idea that was a factor. So if the PawSox had a string of bad seasons, would McCoy Stadium offer itself to, say, the Yankees? THAT WOULD NEVER HAPPEN. And so we shall welcome back the Blue Jays, who used to be the Syracuse Sky Chiefs. And the Ottawa Lynx also existed. And the Red Barons. Holy shit, I am old.

TONIGHT! I'm going to the ballpark and no one will see me there writing everything down and keeping an eye on things. I saw some people and they were very suspicious. You have to be careful around a place like this...

By the way, Nelson Figueroa, Red Wings, probably Esmerling Vasquez, and the Lovely and Amazing Rich Hill. I found my thrill.