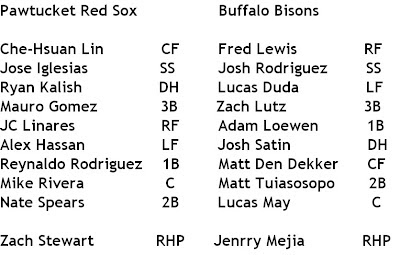 Bisons take it, 9-3, bad scene, everyone's fault. Loss is bestowed upon poor Zach Stewart, who was trying to do a good job. Jenrry Mejia gets the win and he is 2-2. In case you care about Jenrry Mejia.

Stewart made it through three innings, was up to 75 pitches so it was perhaps past his bed time. Five hits, three runs, walks, strikeouts, a wild pitch, makeout sessions and bicycle messengers, punks and art school dropouts.

Mejia pitched five innings. Two runs on six hits, both unearned though. I think this game is a sham. I think no one really cares at this point so the Bisons staff looked up an old game from like 2009 and just tried to copy it as best as possible.

Fifth inning, leadoff batter and... Have you ever noticed that Alex Hassan looks a little like a marionette? Hassanocchio reached on an error. First baseman Reynaldo Rodriguez doubled to center to put runners at the corners, but then he tried for three bases and was thrown out. It's okay, he's young. Hassan scored anyway, on a ground out by Mike Rivera. Nate Spears then singled and stole second and scored on a single by Che-Hsuan Lin, who's been SO HOT LATELY! 3-2!

But after that, bottom of the fifth, the Bisons got to reliever Mark Prior. A leadoff double, a wild pitch, a single, a walk... Matt Tuiasosopo hit by a pitch... Yeah, all that and you get hooked in favor of Alex Wilson. Wilson balked, bringing a run in... 5-2.

Wilson continued to be a friendly helper to Buffalo in the sixth. First, he walked Fred Lewis. Then he got an out. Then he gave up a single and a walk. Lewis then scored on a force attempt, cuz Mike Rivera missed a catch. Lucas Duda scored on a sac fly, Will Inman came in to replace Wilson. And Inman walked in a run. Yeah. Game over at that point. Just crazy bad relief yesterday, probably because the bullpen spent Saturday night on Chippewa.

Oh, Mauro Gomez hit a solo home run in the eighth inning. Gomez is 4th in the IL for home runs. No love for this guy, I tell ya. If Mauro Gomez played for the IronPigs, he'd have fans in the cheap seats with banners and pom-poms and horns and bells. That's how they roll, and that's why I can't wait to go back.

Also, Andrew Bailey pitched a scoreless inning and a third. He absolutely cannot leave. I will use force if necessary.

if i'm having fun then it's breaking your heart:
1. "Lucas Duda went 3 for 5 with two doubles and three runs scored in his return from a double root canal." - Damn, girl!

2. Ryan Kalish went 0-5 with a strikeout. I'll bet he could use some sweet, special comfort.

3. Manager Wally Backman had this to say about Mejia: "He showed signs of having pretty good command and then he struggled a couple of innings where he fell behind some hitters. Overall, he pitched a pretty good ballgame. Threw all of his pitches for strikes. We had him on a pitch count tonight. We had him between 70 and 80. He got to 70 then we had that long inning, so instead of letting him go out and face two hitters, we just shut him down."

TONIGHT! Chris Hernandez will face Collin McHugh and I hope something interesting happens. Rich Hill is slowly working his way back, so I'm hoping for some time with Pawtucket in the near future.

I may or may not be here tomorrow. Going away for a few days. Have fun and be careful!