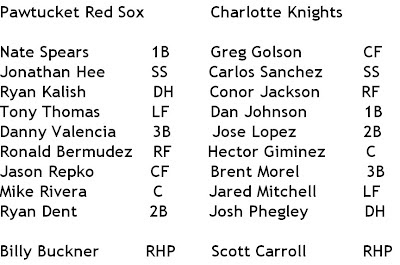 Red Sox win, 4-3. Everybody's gone, too - Gomez, Ciriaco, Iglesias, Lin, Lavarnway, Tazawa... Such a drag. This game took three hours and twenty minutes, for some reason. Possibly because Knights starter Scott Carroll threw 101 pitches through five innings with nine K's. So Pawtucket ran deep counts and then struck out a lot. That is dumb baseball. But they won, so what do I know?

Starter for Pawtucket was Buckner, who gave up three runs through seven and a third innings. Third baseman Brent Morel hit a home run off Buckner in the fifth inning. This greatly affected Buckner's ability to achieve arousal later that night, which is no big deal because it happens to everybody.

Scott Carroll, whose 101 pitch repertoire last night included a balk and a couple of Pawtucket stolen bases, gave up three runs through five innings. Reliever Shane Lindsay came in for the sixth inning but could not record an out so they removed him.

So let me tell you what else happened. In the second inning, Ronald Bermudez reached on an error. Mike Rivera singled, shoving Ronny B over to third. And then when Nate Spears reached on a fielder's choice, Bermudez scored. 1-0.

In the third inning, Ryan Kalish led off with a single and slipped over to second on what was probably a failed pickoff job. Who cares, right, because Tony Thomas hit a home run anyway. Good use of all those muscles, Tony. GET IN THE WHIRLPOOL!!!

Charlotte picked up a pair of runs in the fifth, which was the Morel home run. Top of the sixth, Lindsay walked Jason Repko and allowed a single to vet catcher Mike Rivera and then threw a wild pitch which allowed Repko to cross home and then walked Ryan Dent and then got the hook. 4-2 Pawtucket!

Charlotte picked up their third run in the eighth, before Buckner was replaced by Alex Wilson. Wilson worked for most of the remainder of the game, but Josh Fields came in to get the final out. That's because Wilson loaded the bases with walks. Alex Wilson has been no thrill with Pawtucket and I don't care what he accomplished in Double-A. SHOW ME THE MONEY.

I can't really do much more, because I am participating in a tournament this afternoon in Warwick. Sorry, but I'll be back tomorrow.