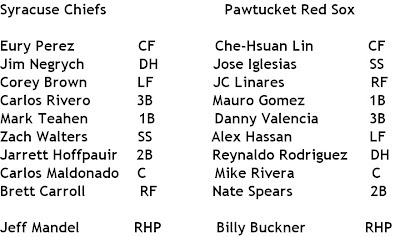 Syracuse WINS! 6-3. Righty Jeff Mandel gets the win for the Chiefs, Billy Buckner does not get anything.

Mandel pitched seven innings and gave up two runs, including a solo home run by second baseman Nate Spears. It took him 87 pitches, only three more than Buckner!

The Chiefs put up a five-spot in the third inning, which began and ended with Jarrett Hoffpauir at bat. The sexy (?) second baseman led off with a double and later scored on a single by DH Jim Negrych. Third baseman Carlos Rivero later hit a two-run double, boosting the Chiefs' run total. Rivero later scored on a single by tall guy Mark Teahen. Et cetera.

Andrew Bailey pitched a scoreless sixth for Pawtucket (LET'S KEEP HIM!), Daniel Bard gave up a run on a hit and a couple of walks, and Jose De La Torre pitched the last two. I guess Jose De La Torre didn't do anything criminal, so I was incorrect.

And now, due to poor time management, I have to split. Sorry.
Posted by Jenks at 11:02 AM