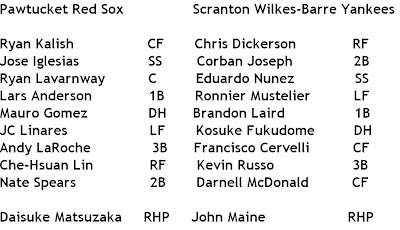 Yankees win, 2-1, in a game played in Rochester. Win goes to John Maine, who used to be Pawtucket's girl and if you look at his line you'll wish you'd never let him go. Loss goes to Nelson Figueroa, who was only trying to help.

Starting P for the Red Sox was Daisuke Matsuzaka, who is rehabbing again. DM pitched 2 1/3 innings and allowed no runs on four hits.

John Maine's start was a little more glamorous. Maine pitched for seven scoreless innings and gave up only one hit. Only two strikeouts, though, but twelve ground ball outs and six fly outs.

There was no score for this game until the sixth inning. Nelson Figueroa was pitching, and he led things off by walking second baseman Corban Joseph. Figueroa got the next couple of outs, but then allowed a single by Brandon Laird. Kosuke Fukudome's ensuing single scored Joseph. 1-0 Yankees.

The Yankees scored their second run off reliever Alex Wilson in the eighth by way of an error and a sac fly. The PawSox picked up their one run in the ninth, with a couple of singles and a ground out. Everything ended when Jose Iglesias grounded into a double play. Bummer.

your two best friends:
1. "In terms of looking like a guy with a myriad of diving and darting pitches who can strike out Nick Swisher or Jose Bautista, [Matsuzaka] looked more like a guy who could strike out Brandon Laird and Kosuke Fukudome." - HA! Nice stuff by Kevin Oklobzija.

2. HA! Again: "I don’t know what “depends on how Dice comes out of the chute” refers to. Maybe if he comes out like normal, walking 7 batters in the first proceeding a grand slam, he gets 75 pitches. If Scranton swings at balls over their head for 3 innings, he only gets 45 pitches. It’s really hard to tell." - from Over the Monster

4. Che-Hsuan Lin got two hits and Nate Spears got one hit and there were no other hits.

Tonight! Zach Stewart and Ramon Ortiz. Sorry, I am at that point of the season where I hit a wall and lose interest. Happens every year.