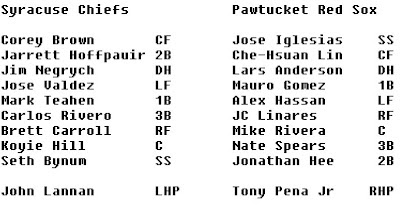 Pawtucket wins, sort of, 8-5. There sure were a lot of home runs. Tony Pena gets his first win, placing him at 1-7 for the season. Ugly.

Starting P for Syracuse was lefty John Lannan, or 'Lannana', as it was spelled on the scoreboard. Maybe that's his nickname. Maybe he plays the piana. Lannan pitched okay overall, but the first inning was pretty shaky for him. He got in five innings, went for a sixth but was unable to get anyone out.

Offense! Pawtucket got things going quickly. Che-Hsuan Lin and Lars Anderson hit consecutive singles in the first inning with one out, then Returning Heavyweight Champion Mauro Gomez doubled, scoring Lin. Alex Hassan reached on an error and Anderson scored. And then JC Linares hit an RBI single to make it 3-0. It was a long first inning.

Mauro Gomez's consistent magnificent power produced a solo home run in the bottom of the fifth inning, making it 4-0 at that point.

Sixth inning, Chris Carpenter made his first appearance for the Pawtucket Red Sox. Carpenter walked Jim Negrych, but that was the only incident. In the bottom half, Lannan very kindly allowed Linares to hit a home run and Mike Rivera and Nate Spears to single before being replaced by Pat Lehman. Lehman hit Jonathan Hee with a pitch to load the bases. A sac fly to center scored Mike Rivera and it was 6-0.

Oh, good, it's the Daniel Bard part! Seventh inning. Bard led it off by walking third baseboy Carlos Rivero. Then Brett Carroll and his toothy grin hit a home run to put the Chiefs on the scoreboard at last. Can I just add that Bard threw one wild pitch? Par for the course, right?

Bottom of the seventh, Mitch Atkins on the hill. Mauro Gomez led off with a double. God, he makes it look so ridiculously simple. Lars Anderson must be so jealous. And then I totally thought Mike Rivera was going to make the last out, since he can't really hit much, but he didn't! He hit a home run! I was never so happy to be wrong. 8-2 Red Sox!

Will Latimer was the final gent to pitch for Pawtucket and it's a good thing they had such a big lead. Latimer gave up two home runs in the eighth, including an enormous blast by left fielder Jesus Valdez. Then in the ninth inning, Carlos Maldonado came in to pinch hit for Seth Bynum. First pitch came, Maldonado just nails it... Whoa... Right to center field. One pitch and he just crushes it. I love Carlos Maldonado. I wish he was my friend in real life.

Jim Negrych made the final out, Hyder's post-game dude was Mike Rivera. And it was marvelous.

french exchange students:
1. Jose Iglesias got zero hits. HOWEVER. I ordinarily sit on the first base side, kinda infield, but last night I was up the third base line, kinda outfield. And I had a great view of Iglesias and the way he gets to balls and throws to first. He's got an insane wrist snap, delivering quite a bit of power for such a smallish guy. It's crazy. They should model a robot forearm after him to like, assemble parts and so forth.

2. For some reason, JC Linares took the field a minute after everyone else at the game's onset. Was he in the whiz palace?

3. "Monday saw Carpenter make his sixth rehab appearance out of the bullpen after making the rounds with the Gulf Coast Sox, Greenville and Portland. His velocity resided in the 92-94 mph range as he walked one – a six-pitch sequence that came against the first hitter he faced – and was aided by a double play ball that ended the sixth inning." - McGair

4. Mike Szostak, it's Jim Negrych, not 'Negrynch' as you spelled it twice. Also, it's not 'Igelsias'.

5. Peter Gobis decided to write about Nate Spears, but not to mention his super creepy dirty mustache.

6. Lannan is allegedly going to start for the Nationals on Saturday because they have a double header. The Lannan picture accompanying the story is pretty funny.

Do you like Doug Mathis? Good, he's starting for Pawtucket tonight. He'll be opposed by big ol' Yunesky Maya. And you should totally go.