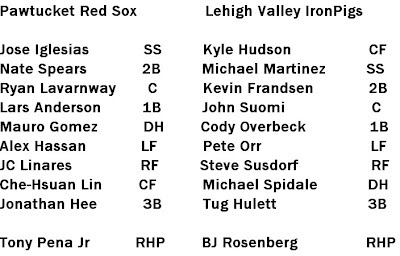 Lehigh Valley knows Pawtucket thinks they're the last lemonade in the desert and stomps right back, extinguishing all hope and winning 8-5 and then piking Tony Pena's mustached head. GRRRROWOWOOWWOWWWRRR!!!!

Pena is not really a starter... Or even that much of a reliever... And he should probably go back to being a shortstop or whatever... He pitched four innings, but he was probably not as effective as Tug Hulett. Pena maybe tried to do five innings, but just couldn't get that last out. There were five earned runs, a couple of homers... Yeah.

BJ Rosenberg got the envelope from the IronPigs (one word). Blow Job Rosie Roosevelt Rosenheimer pitched for four innings, I don't know why, don't care much either. He only gave up one run, which is better than Joe Savery WHAT THE FUCK IS GOING ON HERE???? PETE ORR?? JOHN SUOMI?? JOE SAVERY??? IS IT 2009 ALL OVER AGAIN??? AND RIGHT NOW I COULDN'T TELL YOU IF IT IS ANDY OR ADAM LAROCHE THAT IS ON THE PAWSOX!!!!! WHICH ONE IS THE UGLY ONE?!?!?

God, I hate this game already. The IronPigs scored first. Third inning, Steve Susdorf led off with a solo home run. Then there were a couple of singles and a sac fly by Michael Martinez. And then I listened to Social Distortion and wondered why they were never very good live.

Mauro Gomez hit a solo home run for himself in the top of the fourth inning. GOMEZ SMASH. I love how no matter how crappy Pawtucket gets, Mauro Gomez stays consistent. Lars Anderson can't carry Gomez' jock in that 1B/DH slot, sorry to say. Catcher John Suomi answered back in the bottom of the fourth with a solo blast of his own.

However, bottom of the fifth. Tug Hulett leads off with a double. Hulett was not appreciated in Pawtucket but has found wild success in another state. Pennsylvanians are so mysterious. They're way ahead out there. Hulett later scored on an error by Nate Spears. Spears was playing second and Jonathan Hee played third for some reason. And then Kevin Frandsen, who was also on the PawSox walked. And then that dirty ol' b. John Suomi doubled Frandsen home. Guh.

Sixth inning, Michael Spidale hit a line drive single to center and made it to third on an error. Spidale later scored on a sac fly by Tug Hulett.

Joe Savery came in for the seventh inning and he replaced Michael Cisco who replaced Rosenberg. Gomez hit a home run, his second of the game. 6-2 Lehigh Valley.

Eighth inning was crazy. With one out, Jose Iglesias struck out and advanced to second on a wild pitch by Savery. That is one wild pitch, Joe Savery. Iglesias made it to third on a passed ball. Nate Spears walked. Lavarnway doubled, scoring Iglesias. Positively Lavarnian. Whoops, here comes Phillippe Aumont, LOL. Anderson batting, Michael Martinez makes an error of some kind at short, probably a pickoff attempt or something. Both Spears and Lavarnway score. OOPS! LOL! Aumont then threw a wild pitch with Gomez up, Anderson to second base. But was that enough for Aumont? No, because he threw yet another wild pitch, putting Gomez on first. No one else scored, though.

Garrett Lee Mock pitched the ninth inning, allowed two more runs. Garrett Mock is enormous. Imagine if he laid down on top of you? You would suffocate. I'll bet he smells terrible.

3. This was one game of a double header. Pawtucket lost both games. Ryan Howard was there. I was not, but I wish I were! I'm not rehashing the other game. Do you have any idea what time it is? And I want a burrito wicked bad.

TONIGHT. Pawtucket's back home playing the Red Wings and I would looooove to go, but fireworks brings big mad sweaty crowds and I prefer a roomier venue. I'm sure no one cares who's pitching. BOOM! BLAST! KAPOW! ZUFF! SNUH!! PAN!!
Posted by Jenks at 3:46 PM