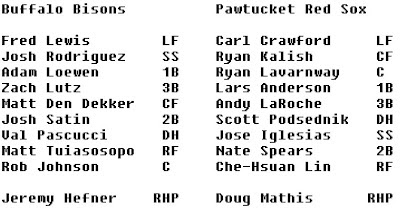 Buffalo wins, 8-5. Carl Crawford was there, Ryan Kalish is back in Pawtucket for some reason, Scott Podsednik is on the PawSox, and we don't have Gomez or Ciriaco. And it was Everybody Gets a Chance to Pitch Day! Hope your ASB was thrilling.

Geez, I hope the rest of this isn't as dull. Jeremy Guthrie... No, Hefner... got the start for Buffalo. Hefner pitched 4 1/3 and gave up four runs on eight hits. I doubt you noticed, but there were 21 hits between the two teams and neither starter got a decision. Yes, it was one of those games.

It all started back in 1976, the Bicentennial. People were using colored pencils to fill in Patriotic posters... And then one day in 2012, Josh Satin walked with one out in the top of the second. And then Mathis walked the hulking Val Pascucci. And then RF Matt Tuiasosopo singled to load the bases. But nothing happened, sorry.

Third inning, that's where my time-traveling spaceship was supposed to land. Mathis gave up back-to-back singles with no outs and someone grounded out, which scored the guy on third. I cannot be more specific than that. Zach Lutz also singled and it was 2-0.

Bottom of the third, the Red Sox picked up a run after three consecutive singles. Kalish gets the RBI. Fourth inning, the Bisons pulled ahead 3-1 by way of the solo home run (Lewis).

FIFTH INNING! Center fielder Matt Den Dekker singled with two outs, stole second base. A soft, nearly flaccid single by first base... Sorry, second baseman Josh Satin gave Buffalo a fourth run. Val Pasucucci doubled right after that, which knocked Mathis out of the game. Alex Wilson stepped in and got the final out.

Pawtucket got everyone's hopes up in the bottom of the fifth. Outfielders Che-Hsuan Lin and Carl Crawford hit back-to-back singles to lead it off. Good work, you guys. Kalish struck out, but Lavarnway hit an RBI double. Exit the warrior, enter Jenrry Mejia. Mejia gave up consecutive RBI singles (Anderson, Hee) but then stapled down the last couple of outs. Whatever, the PawSox were up 5-4.

Garrett Olson pitched after Mejia, went three innings like a champ, allowed no further Pawtucket runs. Alex Wilson hung in there as well, pitching two scoreless. But everything flew wildly apart in the top of the ninth. Clayton Mortensen was pitching in relief. Mortensen got the first two outs, but then Den Dekker reached on an error by the first baseman. After a walk issued to Josh Satin, Mortensen was removed via airlift in favor of Garrett Mock. In theory, that sounds great. Except in fact is was like the Hindenburg. Mock walked four batters in a row. He threw 23 pitches, but only 7 were strikes. WTF. Three runs scored.

And then Tony Pena came in. Bisons shortstop Josh Rodriguez hit an RBI single for the fourth run in the inning. Yeah, that'll do it.

Fernando Cabrera closed the game out for Buffalo in the ninth. Cabrera is why the sea is boiling hot. I can't believe I missed it. Have I made it clear enough that I can't get enough Fernando Cabrera? That he appears like an angel? That he's my frozen fire? That there was something in the air that night? That I go crazy when I look in his eyes? That it's been him right down the line? That it's the woman in him that brings out the man in me? Wait... That's not quite right...

What I am trying to say is that I want to take his clothes off.

two things:
1. Nate Spears got zero hits and struck out twice. Somebody needs a hug.

2. Here's a story on Carl Crawford. It's totally his fault that Boston gave him a lot of money and also Crawford injured himself on purpose. Crawford also tried to microwave his own nuts so he'd be sterile. So, yeah, boo this guy who is intentionally not hitting just to be a lazy entitled jerk. All that stuff he did with Tampa? BOGUS. IT WAS A TRICK!

3. Sean Kenny! "Player Of The Game: Josh Satin, 2-for-2 with three walks and an RBI. Satin performs like this consistently, but the issue has always been lack of a true defensive position and propensity for the strikeout."

Would you guys be wicked mad if I left right now? Something's come up and I have to go. Maybe I'll finish tomorrow... I have some snaps of Fernando Cabrera if you're interested.
Posted by Jenks at 9:57 AM