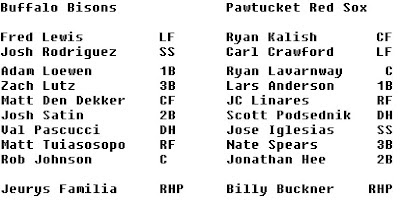 Another loss for Pawtucket, 8-2 yesterday. Sorry I didn't finish my work yesterday, too. Loss goes to Billy Buckner, who gave up three home runs. Ah, Billy: Will you ever win?

Buckner pitched for six innings. That is a fact. He stood on a raised surface and threw a ball toward a dude with a wooden stick. Buckner got five strikeouts, which is a positive thing, but he also walked four batters and gave up six runs, all of them in a sixth-inning clump. Looks like someone was left out a little too long. That's great, because we really needed another Five Inning Freddy on the PawSox.

The hard-throwing Jeurys Familia started for the Bisons. Familia went 6 1/3 and struck out six. Familia allowed no runs. Maybe he could have stayed in, who knows. And I just noticed that this game is very similar to the preceding PAW/BUF matchup. Coño.

The first runs came in the fifth inning, and they came for Buffalo. Buckner walked catcher Rob Johnson and then LF Fred Lewis hit a home run. 2-0 Bisons.

Junichi Tazawa pitched the seventh inning and struck all the guys out. One, two, three strikeouts. Fuck yeah, Tazawa. Daniel Bard was responsible for the eighth inning and I'm thrilled to report: K, BB, WP, BB, WP, groundout scoring Satin, pop out. Oh, sure, only one run scored, but Bard's still all fucked up. 22 pitches, 10 strikes. Bard's one of those players I Just Don't Like.

Pawtucket finally scored their first run in the eighth when JC Linares hit an RBI single. Buffalo greedily grabbed another run in the top of the ninth when faced with Mark Prior, and the Red Sox tried to come back a little bit in the last frame. Elvin Ramirez was trying to finish things off, but he walked Mike Rivera... Wait, Ryan Lavarnway was the starting catcher in this game. So something happened with Lavarnway and all I know is that the Mets need a catcher wicked bad.

Elvin Ramirez walked Rivera and then Nate Spears doubled. Not a good sign when you allow that to happen. Ramirez hit Jonathan Hee with a pitch, another bad moon risin'. Carl Crawford grounded into a force, scoring Rivera. But then Lavarnway flew out to end the game. Oh, whoops, there's Lavarnway. Rivera subbed in for Jose Iglesias. Yes, the veteran catcher played shortstop.

No, that's not what happened. Read a book for once, god.

don't imagine you're too Familia:
1. Lars Anderson doubled twice in this game. Nate Spears got two hits, so here's to an end to his ugly slump.

3. What really happened is that Mike Rivera played third base and Spears went over to second and Hee went over to short, so what we are really left wondering is what happened to Jose I?

4. "The Bisons busted out the lumber, with Fred Lewis homering twice (three RBI), Josh Satin adding a two run shot, and Matt Tuiasasopo adding a two run bomb of his own (three RBI on the night). Lewis’ second shot came off of Mark Prior. Yes, Mark Prior. That makes me feel sad." - Peter Duffy, The Real Dirty Mets.

5. "[Anderson] has not been hitting as of late, slugging just .263 in June, and it's dragged his numbers, which were slowly becoming respectable, down to very 2011-esque levels. Maybe a change of scenery can rejuvenate him, in an organization where he'll be able to have a chance. Or maybe this is just who Lars Anderson is. Either way, both parties are likely better off heading in separate directions by the end of the month." - I think that would be best. (Over the Monster)

TONIGHT!!! Our lord and savior Zach Stewart will tackle Chris Schwinden. They're just kids, they don't know they're supposed to be enemies. I smell a win!