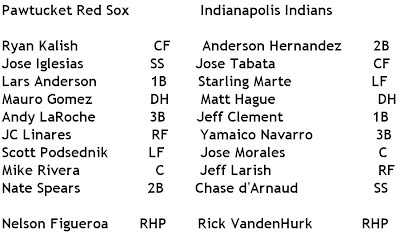 Oh, whatever. If you want, I'll take a pay cut.

Figueroa pitched five innings and I really thought it would be more than that. Welcome to the Red Sox org. Okay, not fair, Figueroa tried to go at least six but his faculties dispatched. He gave up two runs on five hits, walked three and struck out four.

Rick VandenHurk was in charge for the Indians and he pitched six innings. VandenHurk gave up four runs, three earned. Eight strikeouts look really pretty, but the L muddies everything.

The Red Sox scored one run per inning through four. A fine row of ones! Top of the first, beloved outfielder Ryan Kalish doubled and stole third. A single by SS Jose Iglesias brought Kalish into the welcoming bosom of the dugout. That's inning one, run one.

Inning Three, Run Three: Podsednik sac flies Andy LaRoche home. Ryan Lavarnway pinch hits for Mike Rivera after that, because perhaps Rivera's in pain after the HBP. I'm not sure, but why else would this happen?

Figueroa came in for the sixth inning, but after giving up two singles and a double without recording an out, Alex Wilson was given the pitching job. Wilson had to wear a hairnet, but he's saving up for a hot rod rocket. Wilson pitched the remainder of the inning and then the seventh. Clayton Mortensen wrangled the eighth inning and the scandalous Jose De La Torre took care of the ninth. Didn't De La Torre get in trouble for something or other? Is he hot or what?

Logan Kensing and Jose Diaz pitched the rest of the game for Indianapolis. Isn't Jose Diaz that wicked fat guy? Yes. I really recommend doing an image search for him. I realize it isn't nice to make fun, but think of it as a baseball freak show. No, think of it as admiring someone's unique form.

2. "The top of the 1st began with a double by CF Ryan Kalish. Kalish’s grounder just inside the first base line looked like it would be an easy play for Clement, who was playing behind first base. But the ball hit the bag and took a huge looping hop up into the air and over Clement, continuing down the right field line. By the time RF Jeff Larish could get to it, Kalish was rolling into second base. Kalish stole third base, and scored on SS Jose Iglesias’ line drive single." - YEAH! Rather good and thorough game story by Nancy Zinni on Pirates Prospects.

3. "Starling Marte had an RBI double in what Pittsburgh hopes was the last minor league game of his career." - Marte is very exciting and was called up. From 'The Mc Effect'.

4. Maureen Mullen takes a look at Pawtucket starters. Evidently, Doug Mathis and Brandon Duckworth have gone to pitch in Japan. This is exactly what happened to Poochie, more or less, so I guess they're dead and won't be returning. The news of their departure has me so distraught that I am going to get drunk tonight. DRUNK!

Tonight Tony Pena Jr will try to pick up a win. Rudy Owens was supposed to pitch for the Indians, but he was part of the Wandy Rodriguez deal so no one knows what's gonna happen. The Pirates have gotten me so excited right now I can hardly breathe.