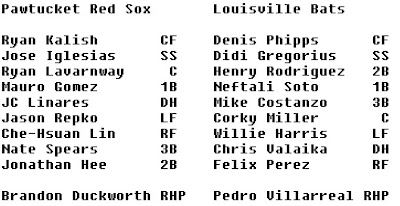 Pawtucket wins, 9-1. And no home runs! Brandon Duckworth continues to hold steady as a triple-A starter.

Duckworth pitched six innings and allowed no runs on four hits and three walks. All of that took 94 pitches.

Pedro Villarreal got the start for Louisville. Villarreal only lasted four innings. He gave up six runs on nine hits and after 90 pitches, I guess they'd seen enough.

I have nothing more to add about the starting pitchers and we should probably get to those nine runs. THEY DIDN'T JUST SCORE THEMSELVES, DID THEY? Okay, they're not so much runs scored as a series of cute human interest stories, most of them involving Mauro Gomez.

Kalish doubled again in the second inning, but no one batted him in. I would have. I would have tried, at least, and then Kalish would owe me a favor. Third inning, more doubles. Is this a record? No, they had six and the record is eight. At any rate, Pawtucket catcher Ryan Lavarnway reached on an error. Gomez then doubled, putting people on the corners. For Jason Repko, who's all better now. Repko doubled to left, scoring two runs. 5-0!

Top of the fifth, Villarreal walked Repko. Okay, thank you for your time. GET ME REX KRAMER! Enter Travis Webb.

Wait, it looks like Villarreal had an injury. Sorry, Pedro.

Webb gave up a single to Che-Hsuan Lin, which unnerved him so greatly that he threw a wild pitch. Repko scored. Later, infielder Jonathan Hee doubled, scoring Lin. This was Hee's sixth double of the year, which I am having a hard time with. Kalish then singled and Jose Iglesias singled and then it was the night Hee came home (Sorry.) Webb then hit Lavarnway with a pitch to load the bases.

Gomez, with the bases loaded, hit a line drive single to left, scoring Kalish. And Travis Webb? Gone. Carlos Fisher came in and got the last two outs. 9-0.

Seventh inning, Garrett Mock pitching in relief. Mock walked Willie Harris and gave up a single to Chris Valaika. When RF Felix hit a fly ball to left, it was deep enough to score Harris. Because of the hustle. I used to call him Hustlin' Willie Harris when he was on the PawSox and I so loved him. And there's that one run the Bats scored, all thanks to Garrett Mock.

Clayton Mortensen pitched the ninth inning. For Louisville, we also saw Josh Judy and Donnie Joseph. Never trust a guy with two first names, especially if one of them is your aunt's name.

garrett mock likes his boner pants:
1. "The Red Sox, who have one of the best records in the International League, played as if they wanted revenge for the June 22-25 sweep in Pawtucket." - Brett Borden, game story. Includes some cool pictures!

2. Mauro Gomez went 5-5, which I am sure Chris Carter never did. I tried to look it up, but I was blinded by the sloppy, egregious typos on the Pawtucket All-Time Records List site. Is Bill Wanless responsible for this?

3. "After walking Repko to start the fifth, Villarreal appeared to have injured himself and was removed from the game. Bell said they were not sure of the cause of the injury. Villarreal will be evaluated Saturday." - Thanks, Kevin Geary.

TONIGHT! More Louisville Bats feat. T-Red, Todd Redmond. Pawtucket counters with the delightful Tony Pena. See you tomorrow, or later tonight because I have something angry to share.
Posted by Jenks at 10:05 AM