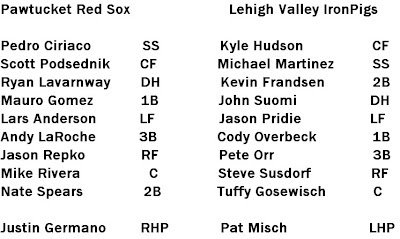 Starter for Pawtucket was Justin Germano who is already gone and he's feeling strong. Germano pitched eight shutout innings, natch, with four hits and ten strikeouts. Ten! And he didn't walk anybody! The Red Sox don't deserve him.

Lefty Pat Misch (formerly of... Buffalo?) started for the IronPigs and had somewhat less success. He did the first inning okay, although Pedro Ciriaco hit a leadoff single because that's what he does. Second inning, uh-oh. Left fielder Jason Pridie left the game in favor of Michael Spidale, for reasons no one will ever know. Wouldn't it be weird if he died? Like, right in left field, just dropped? Yeah. Anyway, LF Lars Anderson led off with a single, then Andy LaRoche doubled. Jason Repko, still working his buttocks off, hit a ground ball single to center that scored both gents on base. Catcher Mike Rivera doubled himself on base after that, and then Nate Spears grounded out to score Repko. 3-0!

Top o' the third, back-to-back singles by Mauro Gomez and Anderson. Repko popped up again like the bay leaf in a pot of spaghetti sauce and tripled, scoring both those guys. OKAY YES WE GET IT NOW JASON REPKO, YOU HARD-WORKING DIRT DOG WHO'S HUNGRY FOR THE BIG LEAGUES. And then, ha, Mike Rivera hit his second home run of the season for a couple more runs. 7-0 Red Sox.

Fifth inning. Andy LaRoche doubles, Repko goes yard. And that ball is GONE! And the insane part is Mike Rivera, who never ever hits, doubled right after that. But Misch buckled down and got three more outs. He would not come out for the sixth. So that's five innings, nine runs on 13 hits. Tough night in Allentown.

Seventh inning, new reliever. Justin Friend, who says shit like "hey make sure to come support Mike Cisco as he performs a post game concert tomorrow night!!!!", got a couple of outs before Lavarnway singled. Then Gomez singled. Then Anderson singled, scoring Lavarnway. And then finally, LaRoche doubled, scoring Anderson. Not Lars Anderson, Leslie Anderson. Hey, how'd he get in there? 14-0.

In the ninth inning, Lehigh Valley let position player (and former Pawtucketeer) Tug Hulett pitch, which is the whitest white flag I have ever seen. I guess he did okay, since he was the only pitcher who didn't give any runs up.

Garrett Mock entered the game in the lower half and nailed down those crucial three outs, but not before Tug Hulett hit a solo home run. Hulett was likely feeling badass after pitching, which game him the confidence to drive one out. He did better than his best.

strength lies in nights of peaceful slumber:
1. Both Anderson and LaRoche went 4-5, with LaRoche hitting three doubles and banging in four runs.

2. “I come in after the next inning and they say ‘Hey, you’re going to pitch the ninth,’” [Hulett] said. “It’s one of those weird, surreal nights. How many guys can say they caught a bullpen, pitched an inning and hit a home in the same game?” - Michael LoRe

3. Josh Kroeger was released. I don't know why. I wonder if he wanted out or the org wanted him out, like it wasn't that great of a fit and no one was happy. Or maybe he just got released. At any rate, bye.

4. "Jason Pridie began the game in left field for the IronPigs, but was removed after playing the top of the first because he was called up by the Phillies to take the traded Jim Thome's spot on the roster." Oh, for crying out loud.

5. I thought Repko looked like Colin Farrell, but maybe not that much. I did find a picture of his baby, though, and his baby is unstoppably cute. BABY!!!!!

6. Ryan Howard is going to be playing for the IronPigs today in the second game of a double header.

7. Pat Misch got sent down to double-A, mostly because of the sucking.

TONIGHT! Double header, with Tony Pena Jr v BJ Rosenberg in game one, Billy Buckner and Tyson Brummett in the second game. You guys enjoy that while I work hard!