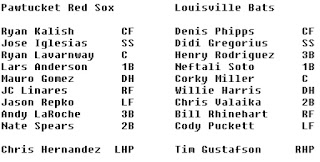 Oakland A's WIN! 9-3 in twelve innings. The win goes to reliever Clayton Mortensen. Bats reliever Kanekoa Texeira is hooked with the loss.A combined 13 pitchers were used, including at least one position player.

Starting P for Pawtucket was lefty Chris Hernandez, fresh and shiny from Portland. We already love him. By 'we', I mean you and I. You love him. Hernandez pitched six innings and gave up two runs on seven hits. One was a home run, hit in the fourth inning by that Chris Valaika motherfucker.

Louisville's starting pitcher was Georgia Tech's own Tim Gustafson. Gustafson pitched five and 2/3 innings and gave up one run, all while wearing a hat with a bat on it.

You know what the money inning was? The twelfth, in which Pawtucket scored six runs. I'm dying to get into it, or 'dwelve' into it, as Jade might say. But I have to build up to it, otherwise no one will make a movie of my life.

First team to score was the Bats, who possibly have great team chemistry. I mean, who wouldn't want to party with the likes of Corky Miller and Mike Costanzo? Fourth inning, second baseman Valaika's solo home run. What's another word for 'home run'? Tater. Valaika's tater. An RBI single in the fifth put Louisville up 2-0.

Pawtucket didn't answer back until the sixth inning, when Ryan Lavarnway hit an RBI double. The Red Sox loaded the bases right after that, which ended Gustafson's nice evening right quick. Nick Christiani took over and got JC Linares to fly out and end the inning.

Eighth inning, Donnie Joseph takes over on the mound after Will Ohman exits. Oh yeah, I forgot to tell you that Will Ohman pitched. Who would you rather bang: Will Ohman or Will Inman? What about Josh Outman? Point it, Lars Anderson hit a sac fly and made the score 3-2 with his hands.

Twelfth inning. We can finally start the big meeting! Kanekoa Texeira was pitching. Lavarnway hit a line drive double to right. YEAH! Lavarnway advanced to third on a wild pitch and Lars Anderson walked. Suddenly, it was time for Josh Judy to pitch and face Super Masher Mauro. Well, you might think that Gomez K'd to make the first out, but you're obviously in the wrong place. PLEASE LEAVE. Gomez hit an RBI single, sucka.

JC LINARES! A passed ball moved the runners up, so Gomez was on second. And being in that position and maybe being less than lightening, Arnie brought in Podsednik to pinch run. Not Scott, the other Podsednik. Linares then doubled to left, scoring Anderson and Podsednik. Still no outs! Jason Repko then singled, and Jonathan Hee doubled, scoring Linares and Repko. And then Nate Spears singled, scoring Hee. I mean, I can't even take it. All those hits with no outs.

Right after Spears' single, Judy got 1-2-3 outs. But that's six runs in the twelfth, which spells an impossible lead. So much so that Jonathan Hee pitched the rest of the game and it was three up, three down. I guess everyone just wanted to go home at that point. No way Willie Harris makes that last out.

When I first met you, you were like a frightened little kitten stuck inside a laundry hamper. Now you are a beautiful swan in a fancy restaurant. Send back the soup, if you do not like it. Order more bread. You are in control:
1. Lavarnway went 4-7 with two doubles. Feels good, doesn't it? Andy LaRoche got no hits, possibly because he was still drunken. Arnie Beyeler made many, many moves in this game because he wanted to win. I like it a lot.

2. Daniel Bard managed to pitch an inning without hitting anyone or throwing a wild pitch or balking or walking anyone or pissing himself. He also struck out no one. That's like, progress or something.

3. So is it Jonathan or Jon Hee? I don't want to get it wrong and hurt someone's feelings. I'll just call him Jonathan Lee.

4. I should probably spend my birthday with Corky Miller

5. "Daniel Bard is throwing strikes with increasing frequency in Pawtucket." - This is some delusional shit right here, almost on par with The Michael Bowden Story.

TONIGHT! Big finale with Louisville. The ever-crappy Billy Buckner goes for Pawtucket. Sean Gallagher runs it for the Batzzzz.