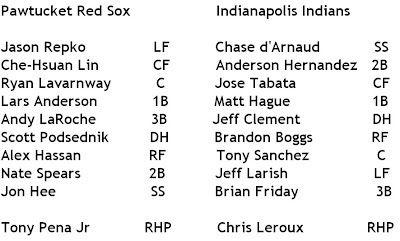 Indianapolis reaches out and touches faith, 5-1. Win goes to the wild and woolly Chris Leroux.

Leroux pitched five shutout innings and then split, having thrown 74 pitches, two of which were reportedly 'wild'. He walked one, K'd three, and gave up three hits. So he's at 1-0. Okay, I'll have to figure that out later on.

No! Let's do this right now! Zut alors! I mentioned yesterday that Rudy Owens was supposed to start, but the stupid Houston Astros got all weird about letting their new pitcher start one more game for his old team. Okay, weirdos. So Leroux got the spot start.

PawSox meat unit Tony Pena Jr, who is a carbon-based life form with a circulatory system, occupied space on a pile of dirt and threw a ball toward a dazzling array of hitters. He did not allow a home run, but he gets the loss, which I'm sure he accepted with reasonable grace.

I keep wanting to say 'The Bats', even though Louisville is well behind the PawSox. But it's the Indians, and the Indians put their first two runs up in the third inning. Pena walked Jeff Larish to lead things off. Jeff Larish was on the PawSox for like 60 seconds, but Lars Anderson beat the shit out of him and he headed for the Pirates org. Larish later scored after a pair of singles. And then a second run appeared by way of a sac fly. Jose Tabata was involved.

The Indians commenced the beatings once more in the sixth inning. Tony Pena led things off by hitting Jose Tabata with a pitch. First baseman Matt Hague then singled, Tabata tried for third but was thrown out by JC Linares. But the next batter was big Jeff Clement, the Doubles King of Indianapolis. Clement doubled, scoring Hague. Then Brandon Boggs doubled and Clement scored. Then Garrett Mock rightly took over pitching duties. Mock got the last couple of outs, but what was the point? 4-0.

Indianapolis shortstop Chase d'Arnaud tripled in the seventh inning, which was great because Anderson Hernanderson singled right after that. 5-0. I'm sure Pawtucket's despair was palpable.

The PawSox picked up their sole run in the eighth inning. Jon(athan) Hee led things off with a double. An error allowed Jason Repko to get on base. When Ryan Lavarnway came up, he grounded into a force that scored Hee. Not terribly exciting, but the game isn't all K's and HR's. Sometimes there's SAC and GIDP and HBP.

I suppose that's it. If you wanna read something more in depth, then check out this terrific game story by Nancy Zinni. It's way better than anything I could churn out.

goodbye starling, it's been nice:
1. Jon Hee led the PawSox in the hit department with two. Glorious. Alex Hassan hurt himself by fouling off his shin or something. Reports are sketchy.

3. "HIs problem this offseason was Pirates didn’t want to start him because he hadn’t thrown enough innings the year before and he had no options. He potentially is going to run into the same difficulty this offseason. But he’s expressed his desire to start. If nothing else he comes up Sept. 1 or so and contributes." - more on Leroux, same as before.

4. Here we have the details on Duckworth and Mathis going to Japan. I wondered if those guys were bros and got drunk one night and decided it would be a killer idea to play overseas. Evidently this was not the case, although it's hard to imagine that they independently came up with the idea. They always sat in the stands together.

5. Chris Carpenter pitched a scoreless inning for Pawtucket. For Indianapolis, fans saw Bryan Morris, who says crap like "Marte hit a hr in toledo that went over the scoreboard and out of the stadium. It may have landed at subway 4blocks away!", Jo-Jo Reyes, and Tim Wood.

6. "Il a blanchi ses adversaires des PawSox de Pawtucket durant les cinq manches qu’il a officié au monticule." - Jacques Lancieault. It's in French. Maybe you can read it. I mostly cannot. I did learn how to say 'PawSox' in French, though!

8. I cannot tell a lie. I totally read Rick Medeiros' blog. It makes me laugh. Check it out.

TONIGHT! Still in Indiana. How you doing, Steve Hyder? Chris Hernandez starts for Pawtucket. Larga cama Daniel Cabrera goes for the Indians. Oh, Cabrera. Why are the pretty ones always insane?