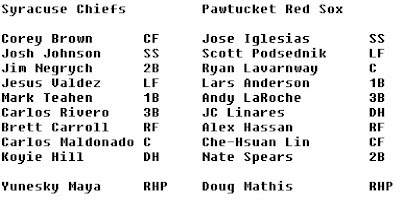 Pawtucket WINS! 8-3 and it is obscenely hot in here and I soaked my head and I am waiting for the delight. Win goes to Doug Mathis, who's most assuredly sleeping in comfort in a much nicer residence than mine.

Mathis pitched six innings and gave up three runs. When was the last time there was a tight PawSox game and not a 8-2 or 7-4 type deal?

Yunesky Maya traipsed through the first four innings, giving up a few scattered hits, but Pawtucket nabbed him in the fifth with an RBI by the King of Sacrifice Flies, Jose Iglesias. This was Pawtucket's first run of the game, bringing the score to 2-1. Yes, they cut the lead in half, but that's such a dumb thing to say about a 2-1 score. It's 2-1, not 8-4 or something. In fact, it's a dumb thing to say all around since it means exactly nothing.

What else? Beloved reliever Will Inman pitched the seventh, allowed a run on a wild pitch. In the bottom of the seventh, Pena gave up a slew of singles and then hit Hassan with a pitch, bringing a run across. Chris Carpenter pitched the eighth, to no one's surprise, and Garrett Mock pitched the ninth.

little bit better than i used to be:
1. JC Linares and Nate Spears both went 3-4, but I prefer Linares. SO DOES YOUR MAMA! Although Spears had extra base hits and Linares did not, so perhaps Spears wins this one. And Spears did hit a bases-clearing triple... Wait, where was I? Oh yeah, stay out of my booze!

2. Scott Podsednik was the sole hitless dude, but I'm sure he has no problems getting laid.

3. "Carpenter came on to pitch a 1-2-3 eighth inning, needing just nine pitches to retire the No. 4, 5 and 6 batters in the Chiefs' order with a pair of strikeouts." - Peter Gobis tackles Chris Carpenter.

Whoops! I had no electricity! I HAD TO SLEEP ON AN AIR MATTRESS IN PAWTUCKET!