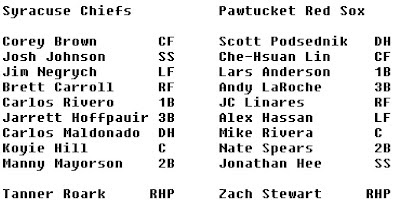 Pawtucket wins, 4-3. Win goes to Daniel Bard, who pitched the eighth inning in which Pawtucket broke the tie.

Starter for the PawSox was Zach Stewart, who is really much better than Billy Buckner. Stewart threw 99 pitches. The Chiefs hit a solo home run... Okay, specifically it was center fielder Corey Brown who did it in his first at-bat, which was really the first one in the whole ballgame. But after that, Syracuse did not score. Until the seventh inning, when catcher Koyie Hill ("Koyie Hill has a crappy dubstep walkup song.") hit his second home run of the game with Carlos Maldonado on base. Hill would be the last batter Stewart faced.

Tanner Roark was the opposing pitcher. Pawtucket racked up eighth hits off Roark, but only the three runs. First inning, Roark gave up three singles in a row before getting an out, so you saw the bases loaded for Andy LaRoche. LaRoche did not make the first out. Instead, he hit a two-run double, popping a two up on the board for the Red Sox.

JC Linares hit a solo home run in the third inning. 3-1. And then Koyie Hill tied it in the seventh, which I told you about. But Erik Arnesen, Syracuse reliever, was the downfall of the Chiefs when he gave up a solo to hot hot bat JC Linares. I love that guy.

Chris Carpenter pitched the ninth and got the save. Two hours and 43 minutes and done.

2. Peter Gobis helps you get to know Mike Rivera.

3. Here's some generic game recap, which I am only linking to because it's a mess. Doesn't anyone check these things?

4. "Brown led off the game with his 21st home run, which puts him alone in third place in the IL, but he also struck out three times." - Whaddya know, people care about Corey Brown. At least Ben Meyers does. He also spelled Koyie Hill wrong.

5. I see they're back to three umpires. What's going on? I hate being left out of things.

6. After this game, the PawSox went on a team excursion: Namely, a bay cruise. Nothing good, just Narragansett. And all I could wonder was who got the most shitfaced? I have a couple of guesses, based on nothing: Andy LaRoche or Alex Wilson. Although I'm sure Tamburro was there, so you don't wanna get too sloppy with guys like that around.

TONIGHT! Pawtucket's visiting Kentucky! OH WHAT LIKE I DID?! It's Duckworth v Pedro Villareal. OH YEAH I TALKED TO AROLDIS CHAPMAN WHEN I WAS THERE!

BECAUSE HE WAS LIVING AT THE HOTEL I STAYED AT.

I ALSO WENT TO THE ZOO.

WHEN I WENT TO SEE THE LOUISVILLE BATS.
Posted by Jenks at 10:36 AM