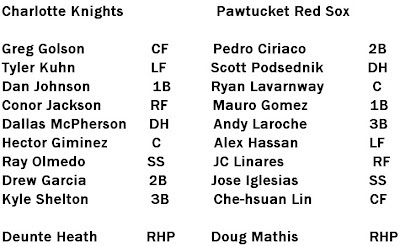 Knights win, 5-2, and if that's not enough then Andy LaRoche and Scott Podsednik and Ray Olmedo and Dallas McPherson were there, too. And someone named Kyle Shelton. The win goes to Gregory Infante, standing proud on the mound and feeling like an ocean being warmed by the sun.

Pawtucket starter was Doug Mathis, who gave up nine hits through six innings but kept the runs down to three. Manageable, right? There were two solo home runs - Drew Garcia and Dan Johnson being the culprits. Except the home run is credited to pitcher Anthony Garcia on the website, which can't be right. Mathis threw 113 pitches for some reason. There's something rotten about this game.

Starter for the Charlottes was Deunte Heath, who only pitched four innings. Pawtucket scored both their runs in the second inning, when Mauro Gomez, Andy LaRoche, and Alex Hassan led things off with three consecutive singles. A couple of force outs and an error later, Pawtucket scored the second run. I hope I didn't just confuse you...

Daniel Bard I guess tried to pitch. It was fucking awful, even for him. It was the seventh inning and Bard was facing CF Greg Golson. Golson was with the Yankees, wasn't he? Whatever, Golson singled and stole second base. Next batter, left fielder Tyler Kuhn, flew out to center field, which was the best thing that happened for Bard. Bard then walked Dan Johnson and hit Conor Jackson with a pitch, loading the bases. Bard then walked Dallas McPherson and Hector Giminez, bringing home a couple of runs. Good night, Bard. That was 26 pitches, nine for strikes.

Wilson finished the game, but it was all over. Brendan McGair kicks his story off with "It doesn’t get any lower if you’re Daniel Bard." Yes.

such a delicate thing that we do:
1. Pedro Ciriaco went 3-5 with a double, bless his heart. Bard probably never talks to him. LaRoche also went 3-4. Did he start the year on the team and has been injured? I can't remember.

2. Craig Forde writes about the game for a Very Important Newspaper.

3. By the way, Justin Germano might pack his eyebrows and head for the hills, since today is Opt-out Clause Day. If he goes, I believe everything will fly apart into molecules of misery. And did you know that Will Inman's Day has come and gone and no one knew about it? Quote from the above story: "If you really want to find out what’s out there you can go out and look, but the grass isn’t always greener. That’s what I was pretty sure that I was going to stay here unless something drastic came up. For us (ballplayers), it’s not just ‘Hey, you’re playing at a new field.’ You have a family to consider and start new [apartment] leases. I think mentally, just being comfortable in one place is something that really helps and correlates to good performance on the field.” That's Will Inman, getting comfy cozy in Rhode Island. I'm happy to have him.

4. Peter Gobis helpfully explains the LaRoche thing. I don't like it.

TONIGHT! Lefty Pat Misch will take down the shaky Pawtucket foundation in Lehigh Valley. What? I was just there! They have a big parking lot and stuff! Justin Germano will pitch for the Red Sox... Or will he?