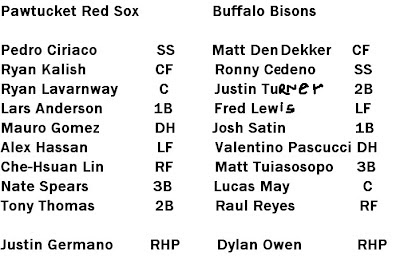 Justin Germano, doin' it well, 5 2/3 with one run and the Red Soxes win 8-3. Germano only gave up one run, a homer to CF Matt Den Dekker, who says shit like "Big deal your the spelling bee champion, I have auto correct on my phone." (HA.) Thank you, Justin Germano, for the sustained excellence.

Starter for the Bisons was our dear friend Dylan Owen, who didn't last long... But long enough to get the loss. Owen pitched three innings and gave up four runs, including two home runs. His Merry Band of Five Relievers worked it out for the rest of the game, with Jack Egbert being notably bad for his one inning.

Pawtucket scored first in this game, with shortstop Pedro Ciriaco leading off with a home run. I have to meet Pedro Ciriaco. I have to figure out a way. Do you think he speaks Spanish? And then in the top of the third, Tony Thomas himself hit a solo home run, his fifth of the year. And now he has more home runs than Nate Spears! EAT IT, NATE SPEARS!

Oh, hang on, I can't leave the third inning yet. Ciriaco Reached on an error, Ryan Lavarnway walked. Lars Anderson hit an RBI single, scoring Ciriaco. That's 3-0 to you, Flapjack. Alex Hassan also hit an RBI single, but it wasn't as pretty as Anderson's. 4-0 Pawtucket. And I guess that killed Dylan Owen.

Reliever Jack Egbert stepped into the void for the fourth inning, and Nate Spears got to him first with a double. Then Ciriaco doubled, scoring Spears. But the best part is Ryan Kalish, because he went yard and circled the bases. Yup. 7-1. And that is Dallas.

Top of the ninth, and IL saves leader and explosively hot Fernando Cabrera takes over on the mound. HE CAN TAKE OVER... Never mind. Anderson hit a home run, which is the real truth. Which is also the same as an entertaining lie. Will Inman pitched the bottom of the ninth for the PawSox, and you knew we couldn't get out of the game without some Valentino Pascucci muscle. Pascucci hit a home run, because he is a freaking giant. And Inman's so little!

two things:
1. Josh Kroeger got the night off, which makes sense as he leads the team in appearances. And still no Jose Iglesias.

3. "On the bright side, Matt den Dekker hit his first AAA home run, Jenrry Mejia tossed a scoreless inning out of the pen, and both Ronny Cedeno and Justin Turner made rehab appearances and are probably less than a week away from joining the big club." - from Amazin' Avenue

4. Ciriaco went 4-5 and was a triple shy of the cycle. Ciriaco is like my Justin Beiber. I am such a fan. Should I kill him?

5. Mike Harrington again has a most excellent game story: "The only time [Ciriaco] didn't get a hit was in the third, when his infield pop-up dropped in for an error charged to first baseman Josh Satin. Owen was bumped near the mound by third baseman Matt Tuiasosopo and Satin didn't make a move at the ball when that mild collision happened, bringing plenty of hoots from the crowd."

8. Not much recognition for Germano's good work in Pawtucket, but he's mention briefly here on Bosox Banter.